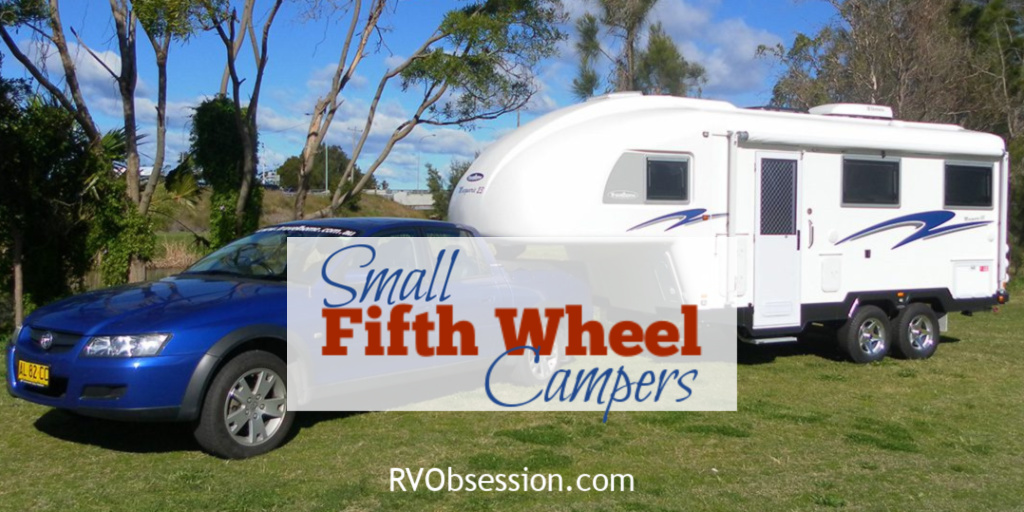 Some of you would have already realised that when it comes to RVs, for me, smaller is better. I’ve harped on about how here in Australia we just don’t have many large RVs, but we’ve got tonnes of smaller RVs (including small fifth wheel campers), but big enough to live in comfortably even if you are full-time.

There’s just not the infrastructure in place here to accommodate large rigs. While there are caravan parks in every city and town across the country (even those blink-and-you’ll-miss-it small towns). They are often set up as back in sites, where you’ve got enough room to back your caravan in place (so you better get good at backing), a little patio area beside your caravan, and if you’re lucky, a spot beside that to park your tow vehicle (other you have to park it across the front of your site… or in your patio area.

There are not a tonne of pull through sites, and not every caravan park can accommodate a long rig. I’m sure it’s the same everywhere, that’s why I see so much chatter about ‘going-smaller’ on RV blogs.

Oh, this morning I took a picture of the fifth wheel beside us at the showgrounds we are at currently. Not very big huh! But compared to our teeny tiny caravan it’s a huge beast that I would totally love to call my home! Although we’ve scored the jackpot with our shady spot under the tree. 🙂 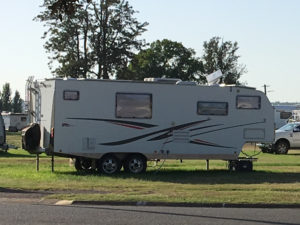 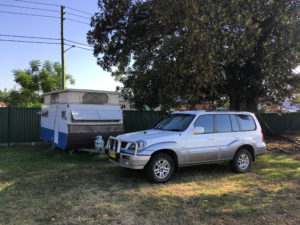 So if you are also in the same situation, where you like the idea of a fifth wheel trailer, but are not keen on anything too large, this post is for you!

Why a small fifth wheel camper?

One of the reasons you might be looking for a fifth wheel is that your tow vehicle can tow a bigger, heavier rig if the load is centred on the bed of your truck as in a fifth wheel, compared to the weight being on the tow bar like a travel trailer. So it may seem counter-intuitive to have a small RV as a fifth wheel. I mean, if it’s small, you may as well just have a travel trailer. But there are other reasons to consider a small fifth wheel, such as more stability (less sway) while travelling at speed, and a bit easier to reverse (apparently) into your site.

Since the word ‘small’ is a bit subjective, I’m limiting this search of mine to anything under 25ft (okay, maybe a smidge over 25ft) and must include a bathroom (toilet and shower).

We start off with a fibreglass fifth wheel from Canadian company Escape Trailer Industries. They do have 3 other, smaller trailers, but this is their only fifth wheel and is 21’2”.

The layout packs a punch with everything that they fit in there, and while it’s not my favourite layout, it does have everything you need… as long as you’re cool with a wet bath, of course. 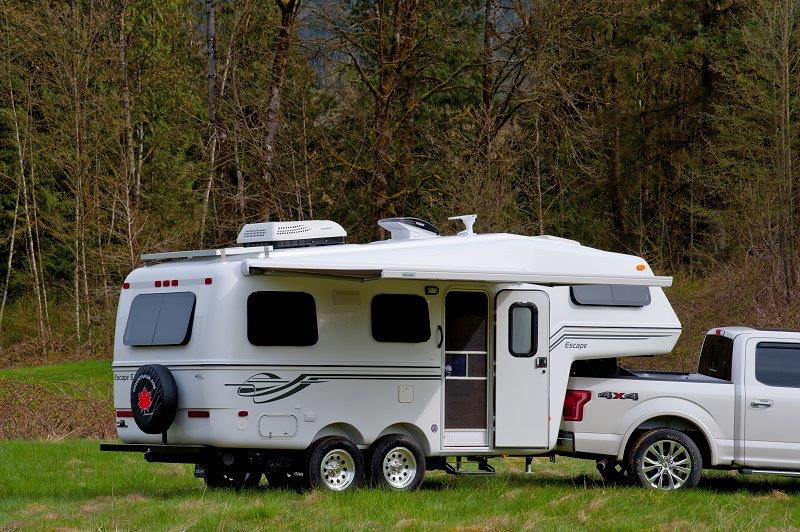 A brown interior, that even has clashing patterns. <sigh> 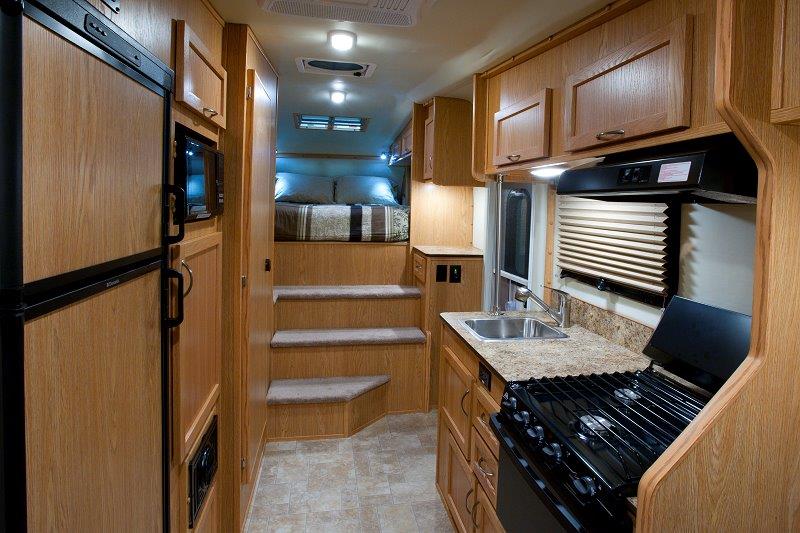 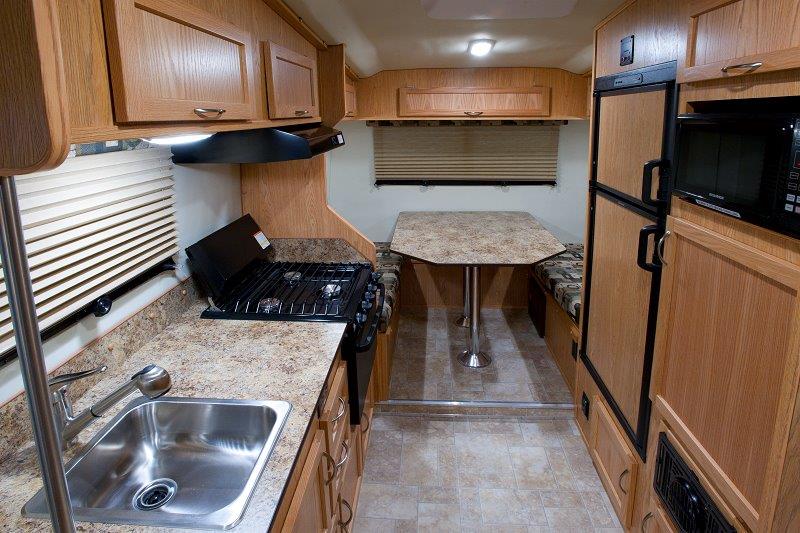 This is the ‘smidge over 25ft’ fifth wheel from KZ which comes in at 25′ 3″. It’s the smallest of their fifth wheel range but has all the bells and whistles that we have all come to expect from the much larger rigs.

I really like the layout with the kitchen on the back wall, it makes the most of the entry being straight into the kitchen, rather than having a separate entry area. This rig fits in everything I could want in a home, and nothing more, keeping it short and probably light. 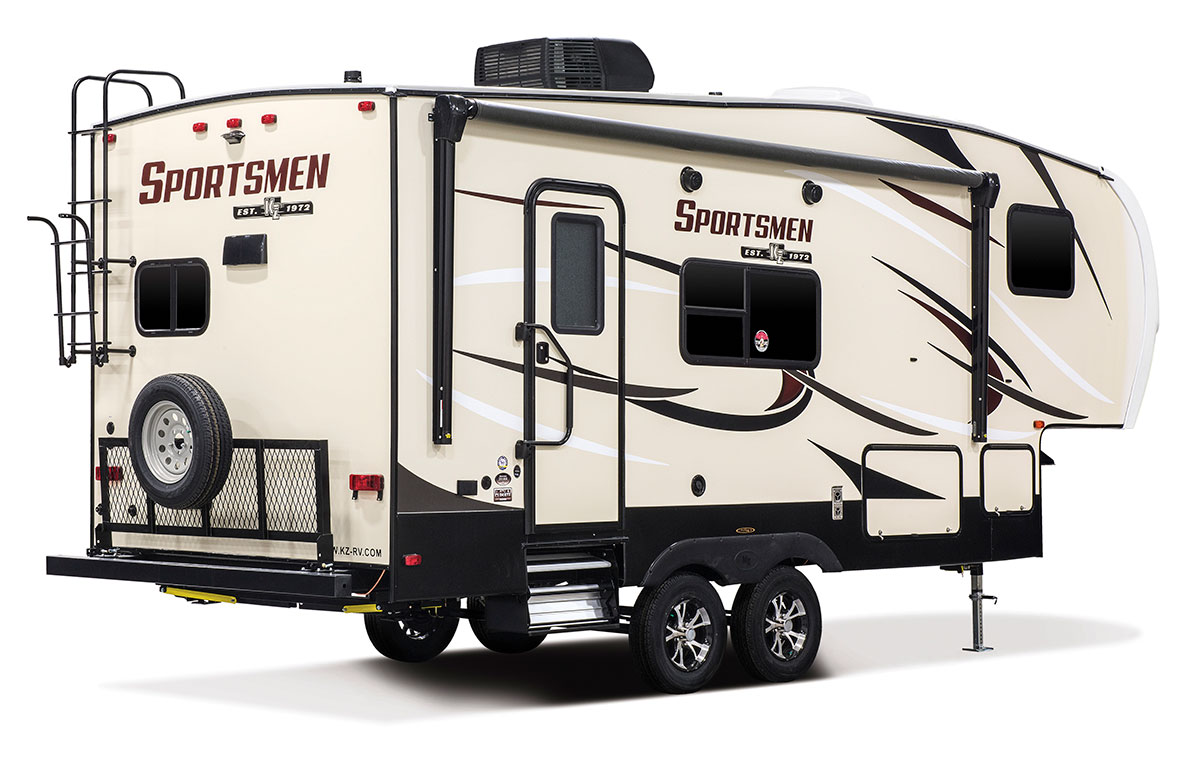 It makes my poor heart sore with sorrow to see all that brown decor though. I hate it with a bit of a passion, and it seems such a waste when it’s a brand new RV. I’m pretty sure I’m preaching to the converted here, so I’ll try not to go on too much about it. #istillhateitthough 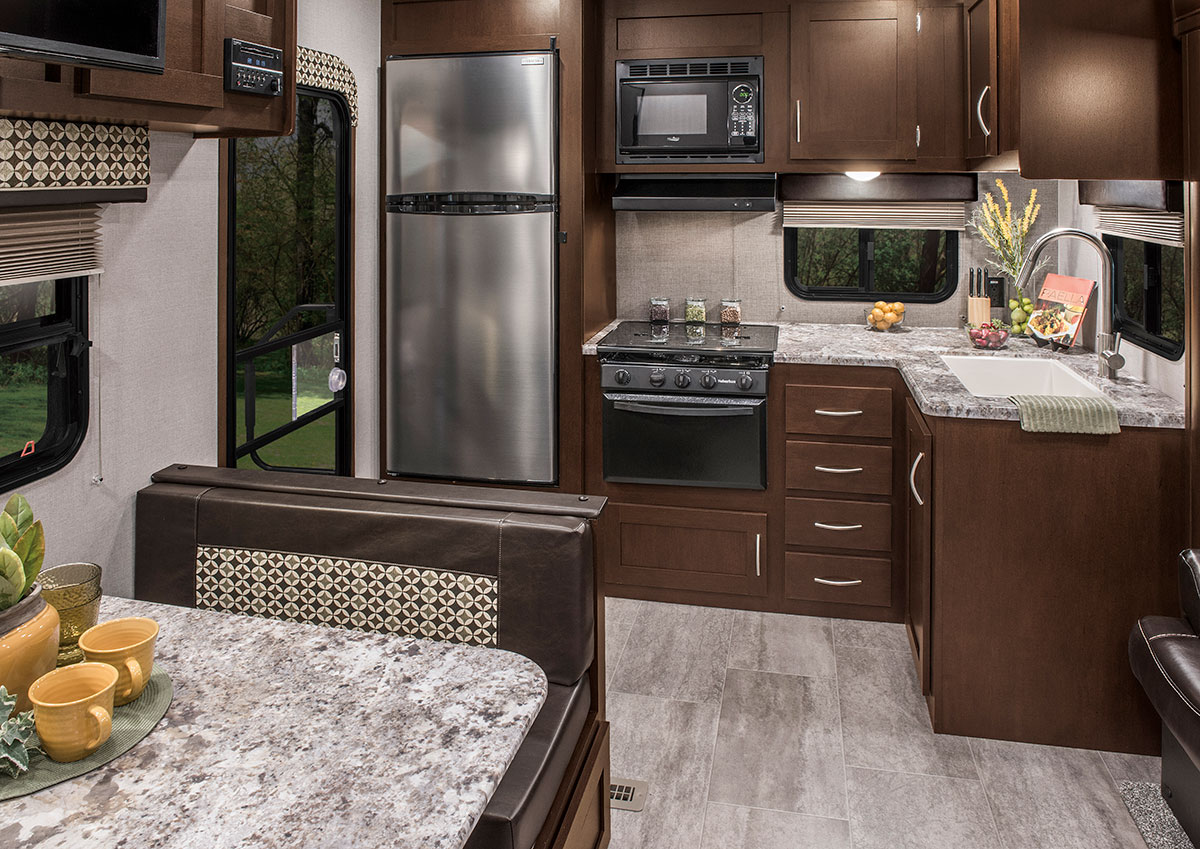 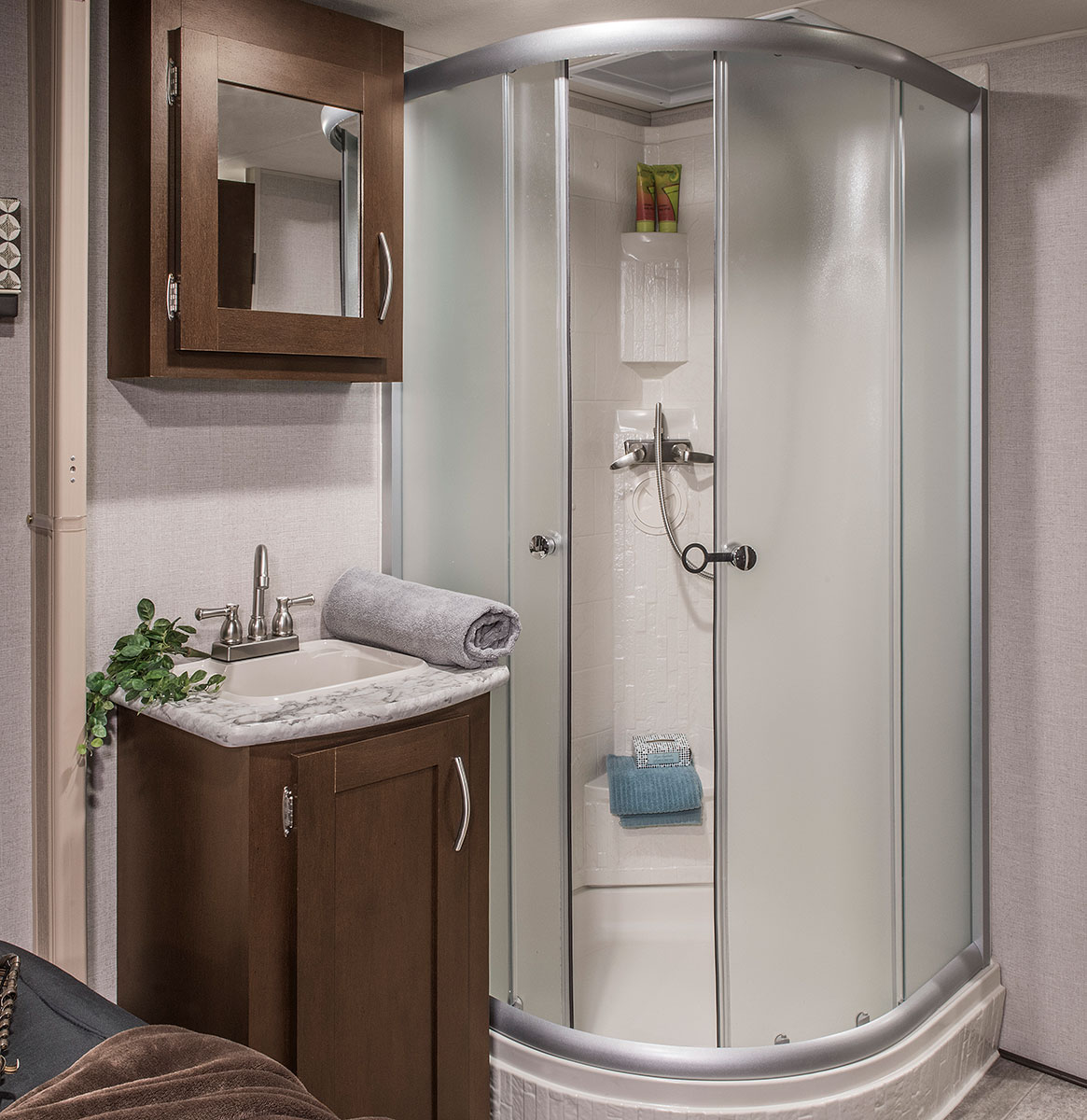 You know we couldn’t go past this one, right? Another fibreglass fifth wheel, the Scamp already has the ‘small, light’ niche covered.

At just 19’, it is the smallest of the small fifth wheel campers; but thankfully, it still manages to fit in a small wet bath.

Everything is downsized, as you would expect, but that’s what you get when you want small.

But… boy is she ugly! I know that beauty is in the eye of the beholder, but… just look at her! There’s something about the shape, and the uneven roof and the sticking out awning, that just make it look unbalanced and, well, odd. 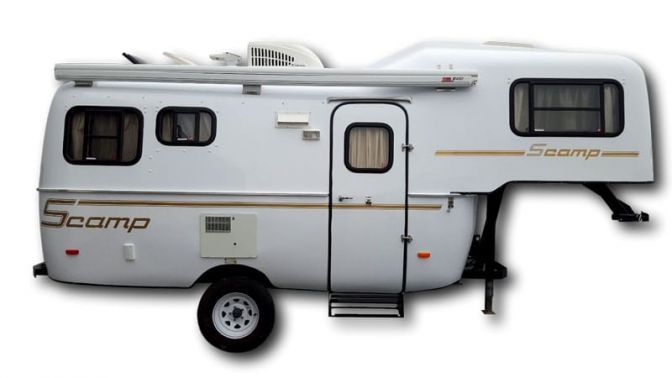 And I gotta admit, the interior ain’t much better either. More brown, but at least it’s a lighter brown? 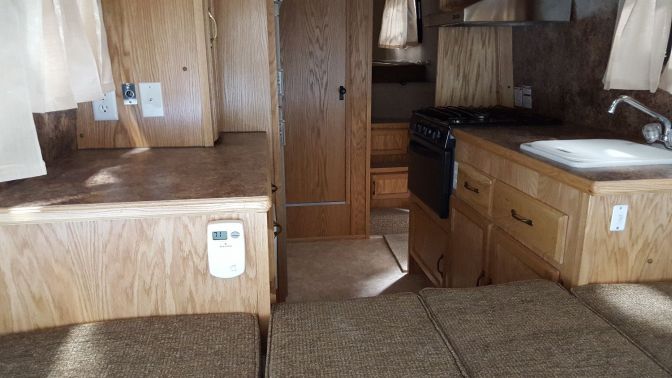 I know I’m being harsh, but when a manufacturer spent so much time, money and effort in getting the important things right (size, weight, length, structure, layout etc) it’s just so disappointing to be let down by something that’s so easy to change… the color of your decor. It’s just a color (okay, and maybe texture too) but surely it’s the easiest thing for any RV manufacturer to change?

Aaaaand… that’s it for North America. Not much selection, so I’ve broadened my search to Australia and Europe.

I like this layout (this is the 7m version) and it’s got everything we need. No sofa/couch, but we’re okay with that.

And thankfully, the decor it light and bright. Maybe not to everyone’s taste, but at least it’s not brown. 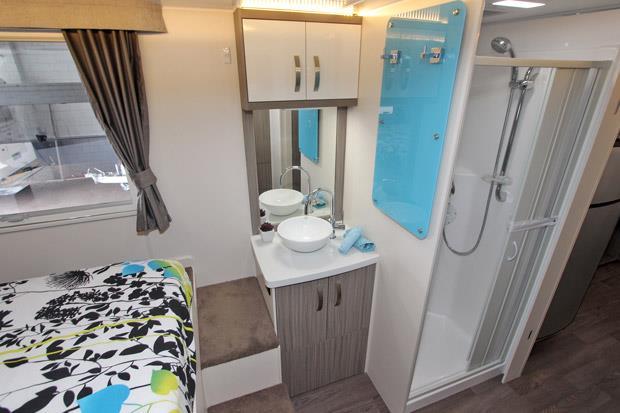 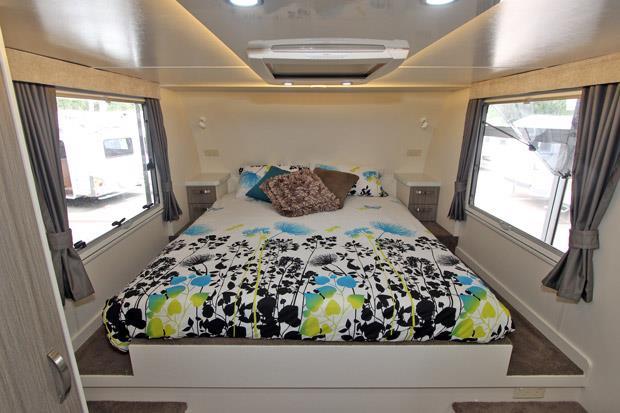 Though the layout shows single beds, they can actually be converted to a queen bed. 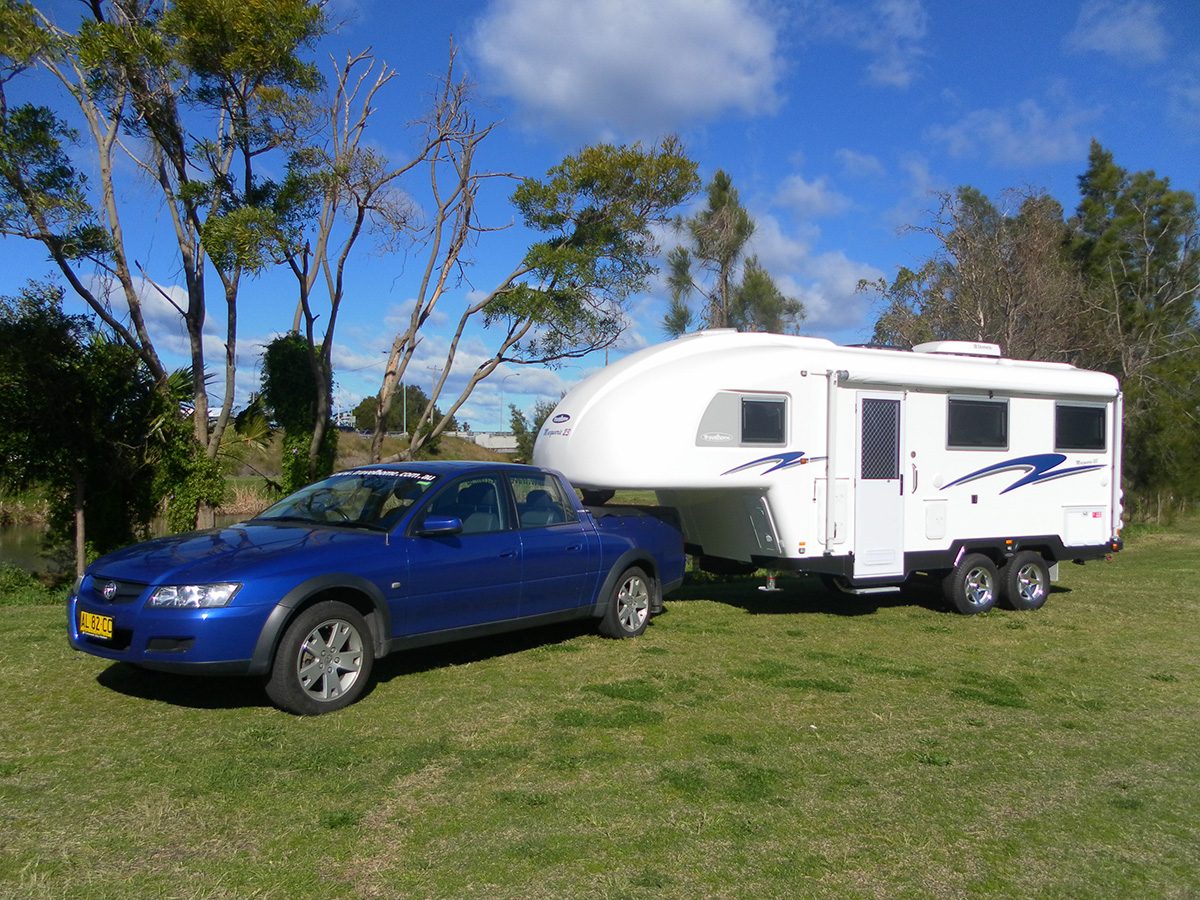 I notice that all the Aussie fifth wheels don’t have a high roof over the bedroom area, so it’s more like a sleeping space as opposed to a bedroom, I s’pose.

I’m liking the decor too. It’s a bit bland (which is good, because you can jazz it up however you want) but it’s certainly not ugly! 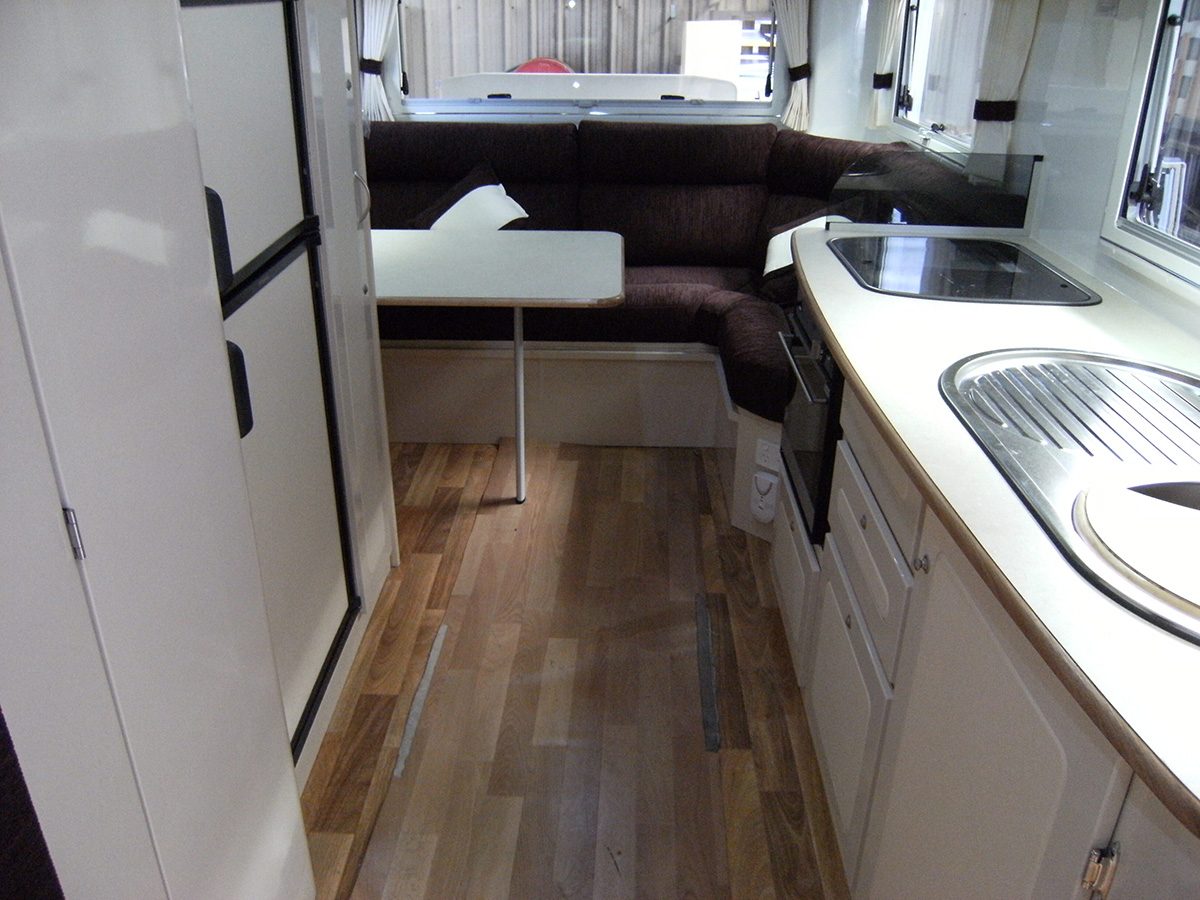 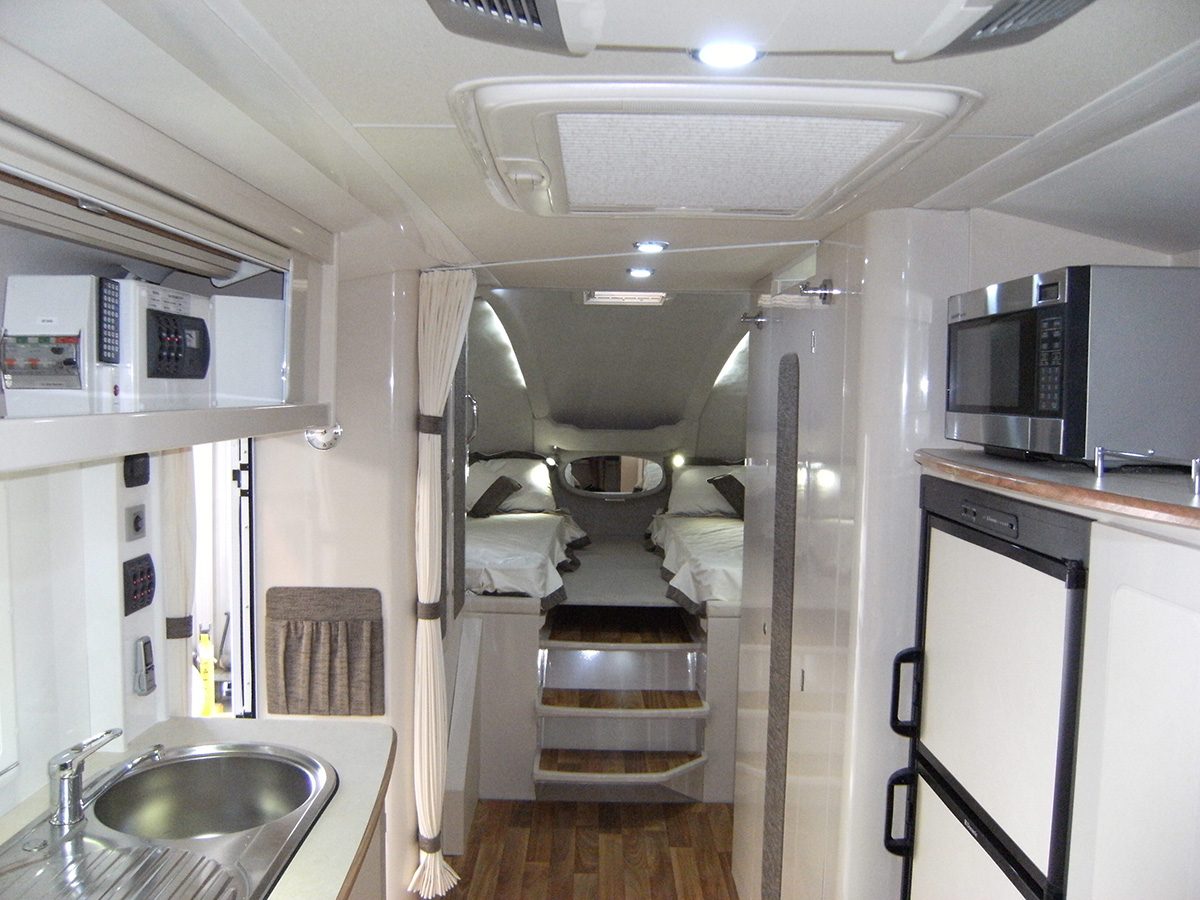 Winjana have 4 fifth wheels and they’re all under 26’ but the one I want to look at is their smallest one at just 19’5”. They don’t have a layout plan, and limited photos, but I’m guessing the bathroom is a small wet bath.

But look at this little cutey! 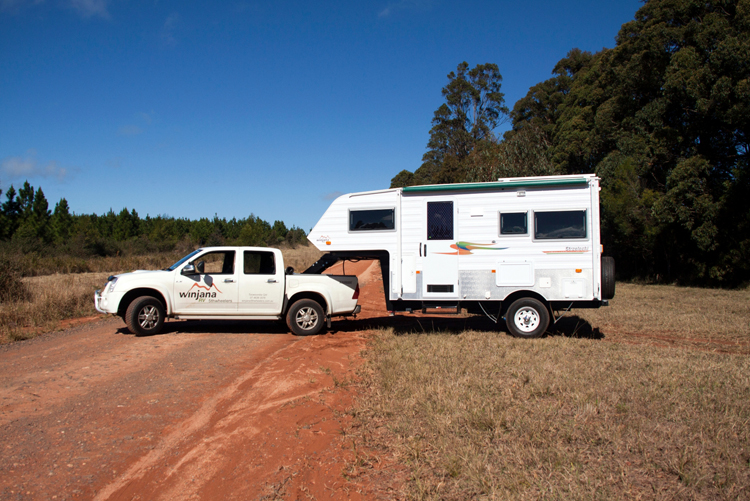 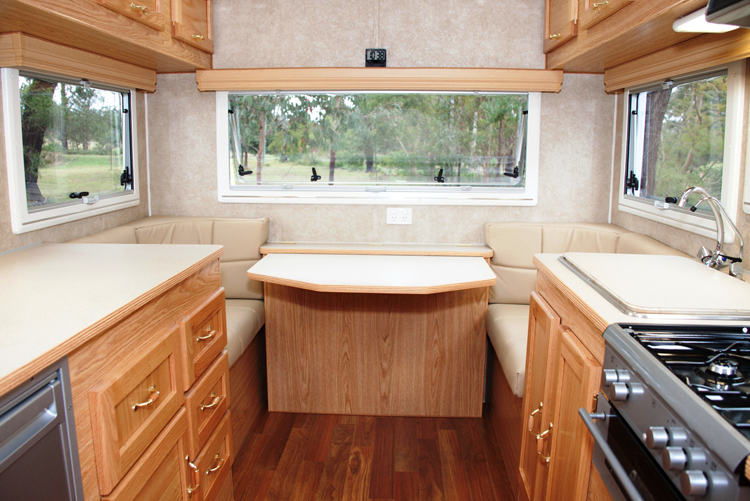 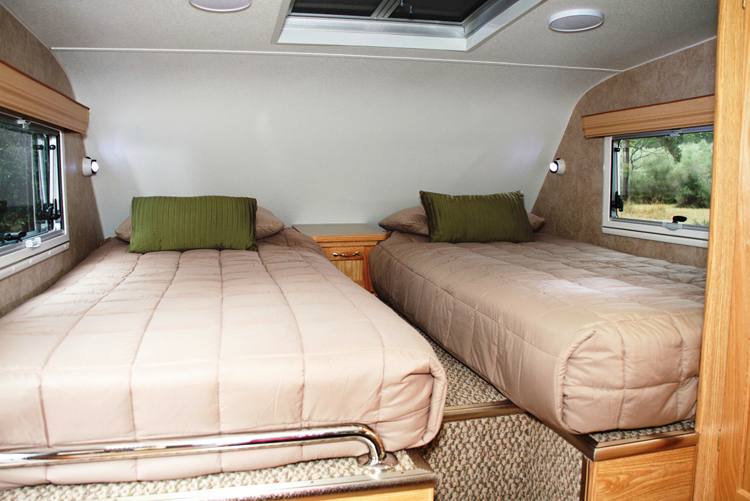 The Fifth Wheel Co is a British built brand has a small range of fifth wheel campers and one of them fits our small category nicely.

The Dreamseeker is a petite 24’11” and manages to fit in a full (walkthrough) bath and a sofa as well as the dining area. 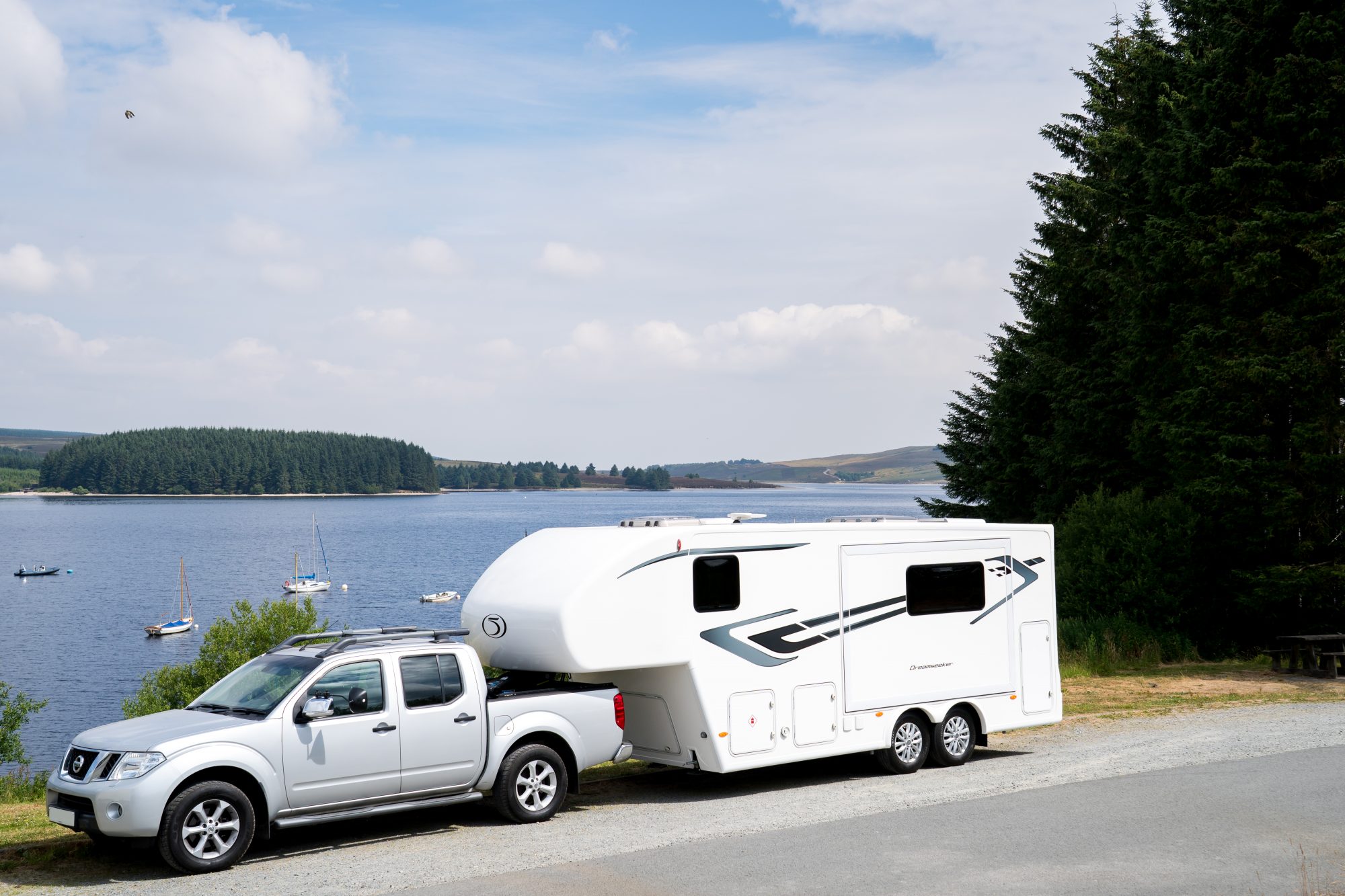 That dining room slide sure does open up the space in there. 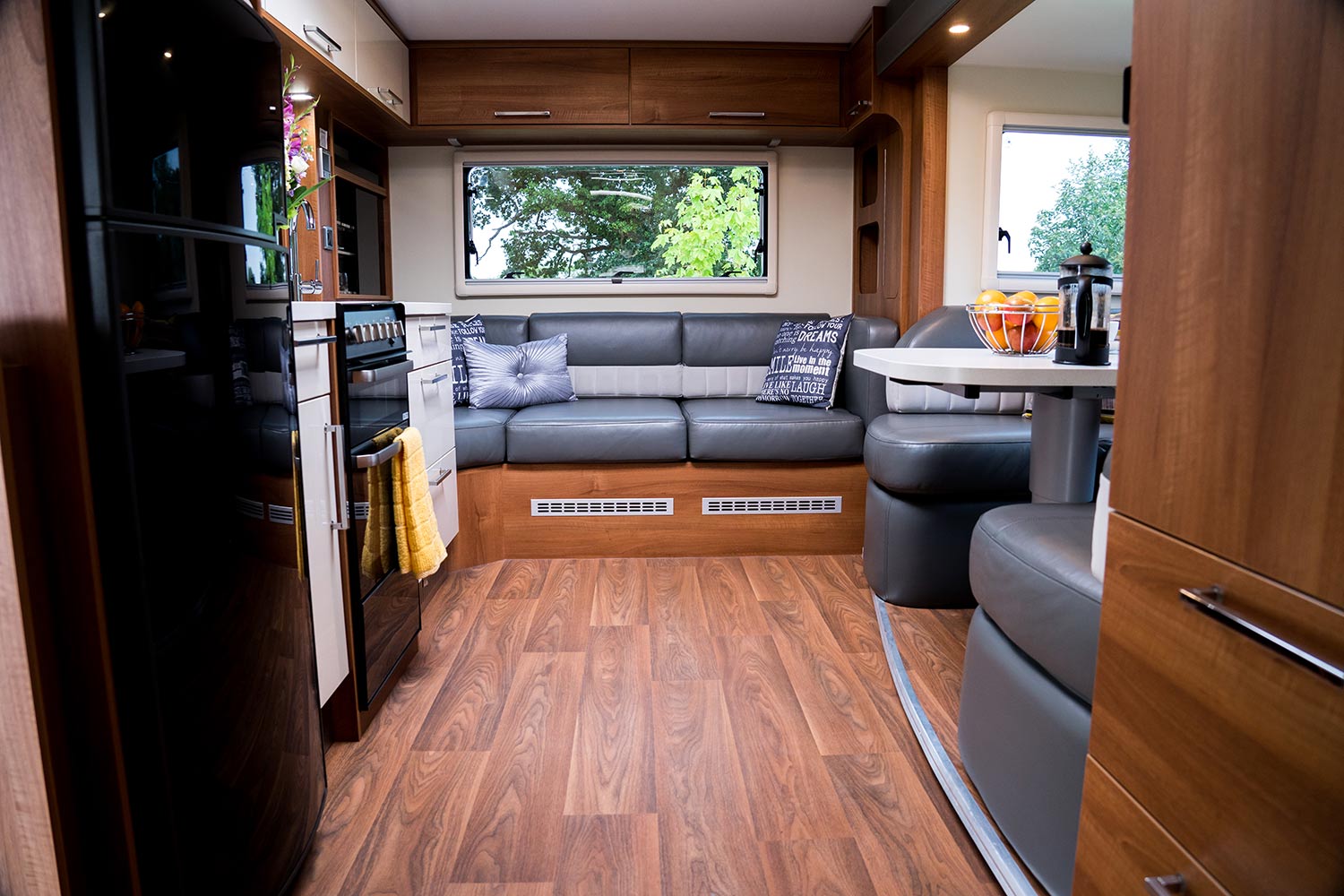 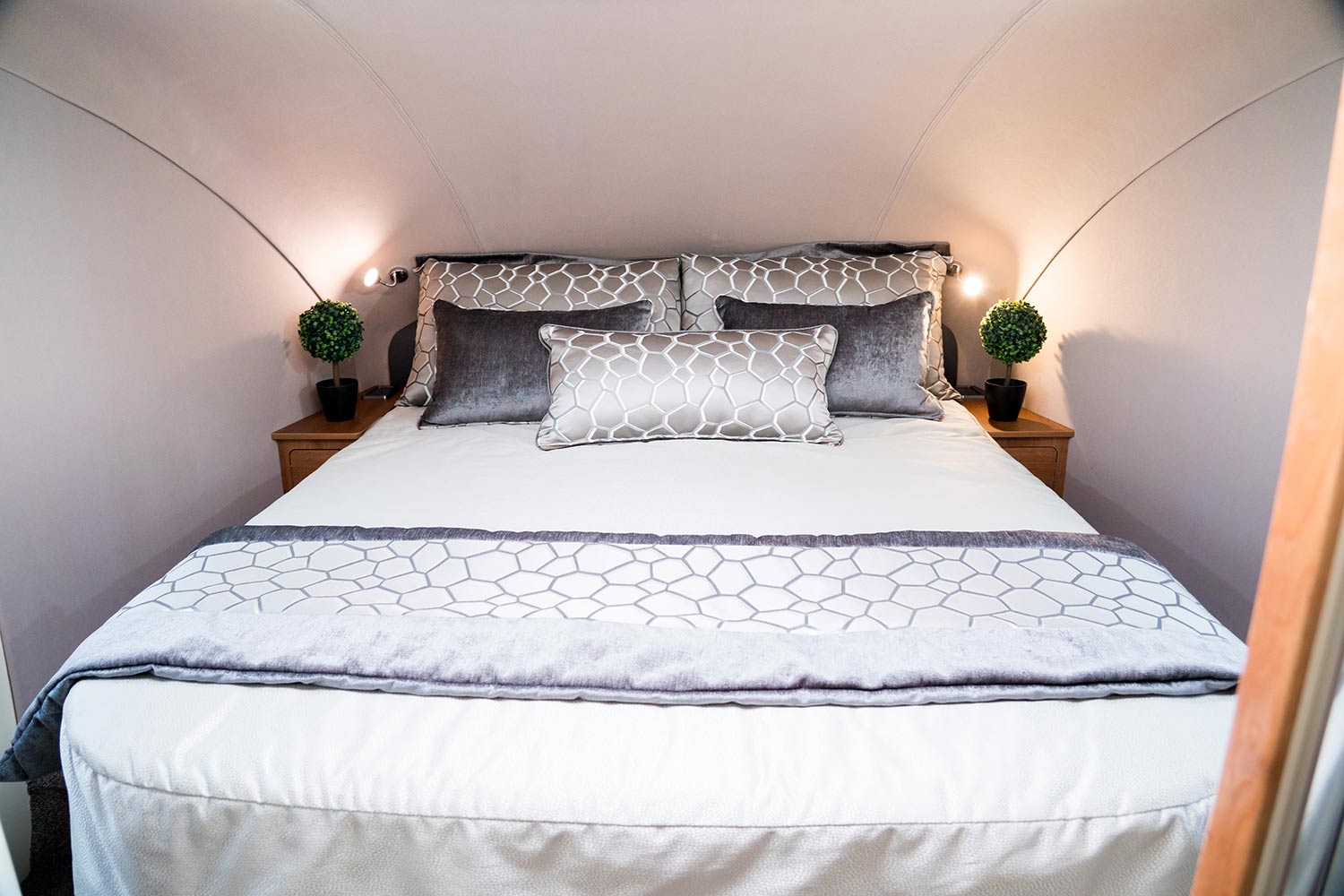 Is anyone else breathing a sigh of relief at this lovely interior decor. Leave it to the British, huh!

So there we have it my friends, a selection of small fifth wheel campers 25ft and under that have a bathroom with a toilet and shower.

You’ll see that I’ve added a link to each of the fifth wheels so you can go and check out all the latest details for yourself. I hope you’ve enjoyed this little look at the little fifth wheelers.

Are there any that I’ve missed? Let me know in the comments below. Just fifth wheels mind you!

Save this post by pinning one of these images to your RVing or Fifth Wheels board on Pinterest. 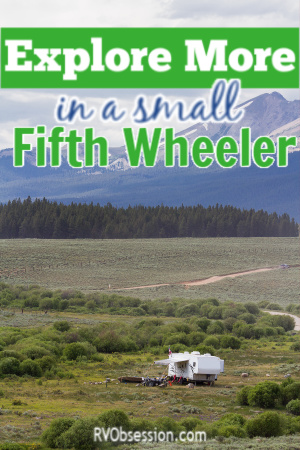 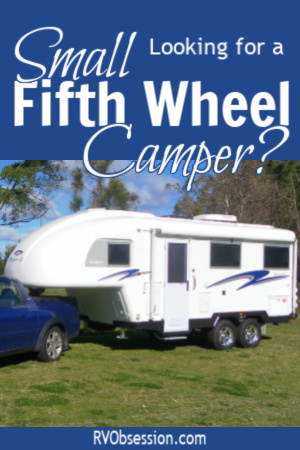