I love dreaming over RV renovations and this one is just beautiful.

This is ‘Hunter’, a 1973 16ft Viscount Royal which is a vintage travel trailer remodel coming to you from Down Under!

The Viscount brand of caravans were prolific in the 60’s and 70’s in Australia. They brought mass production to the Australian caravanning industry and at their peak, in 1978, they were producing 3 out of every 4 caravans and campers sold.

The fact that they are still around, all these years later, is testament to the quality of build of these vintage travel trailers.

They are being bought up, and renovated in increasing numbers, and recent world events have only added to their popularity. 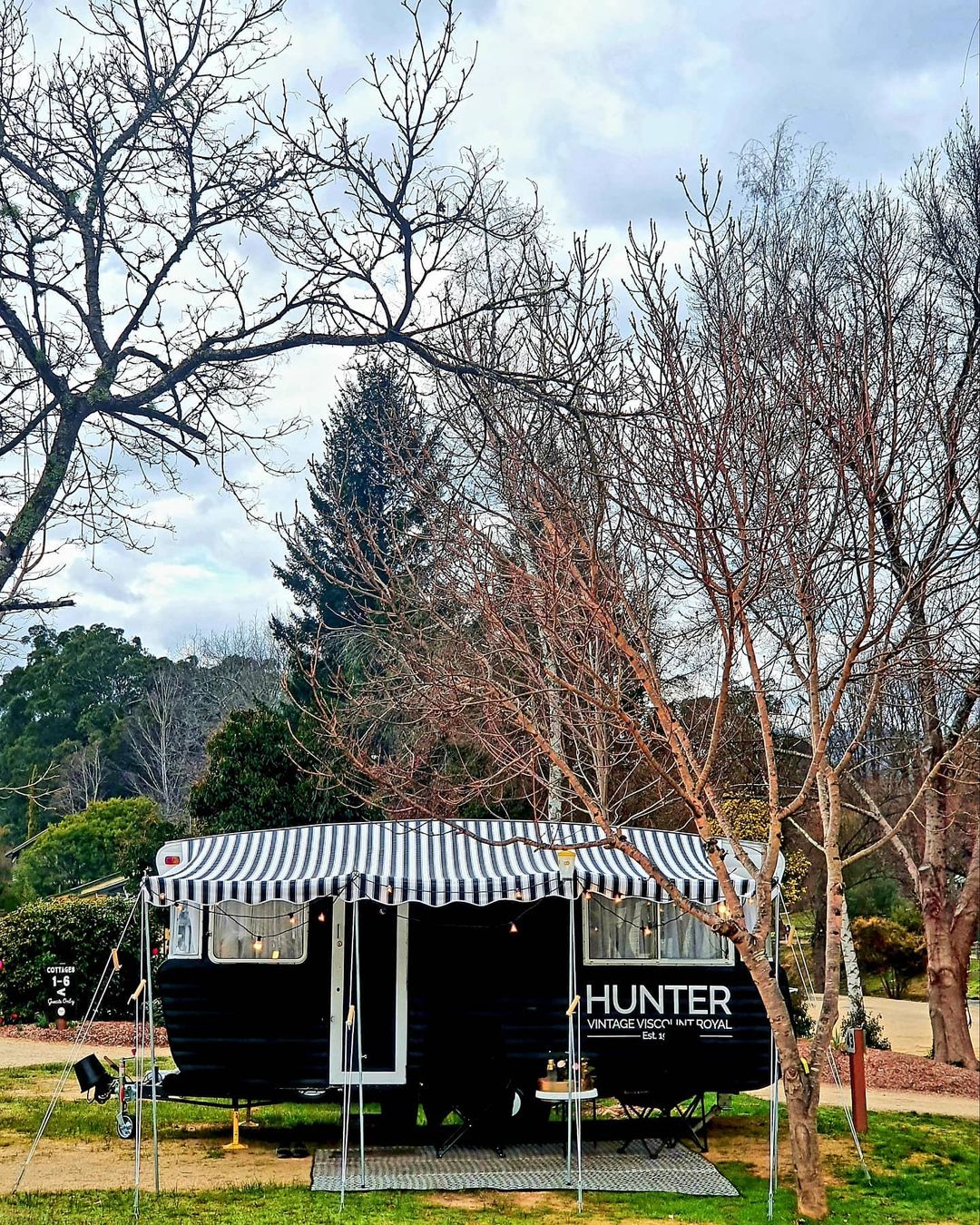 Herb and Samantha bought ‘Hunter’ near the beginning of the pandemic, he was a passion project that they undertook as they neared their early retirement.

Restoring Hunter would give them a unique and cozy home for their travels around Australia.

As first time caravan renovators, they found out very quickly that Hunter needed A LOT of work; the strip out revealed the extent of the water damage.

So E.V.E.R.Y.T.H.I.N.G  had to be removed, repaired, repainted or replaced.

They did most of the work themselves, but they employed help for those parts that they couldn’t do. Like getting the windows and skylights made, and the entire electrical rewiring.

The transformation of Hunter is just amazing. I’ll let these before and afters tell the full story!

Vintage Travel Trailer Remodel – Before and After photos 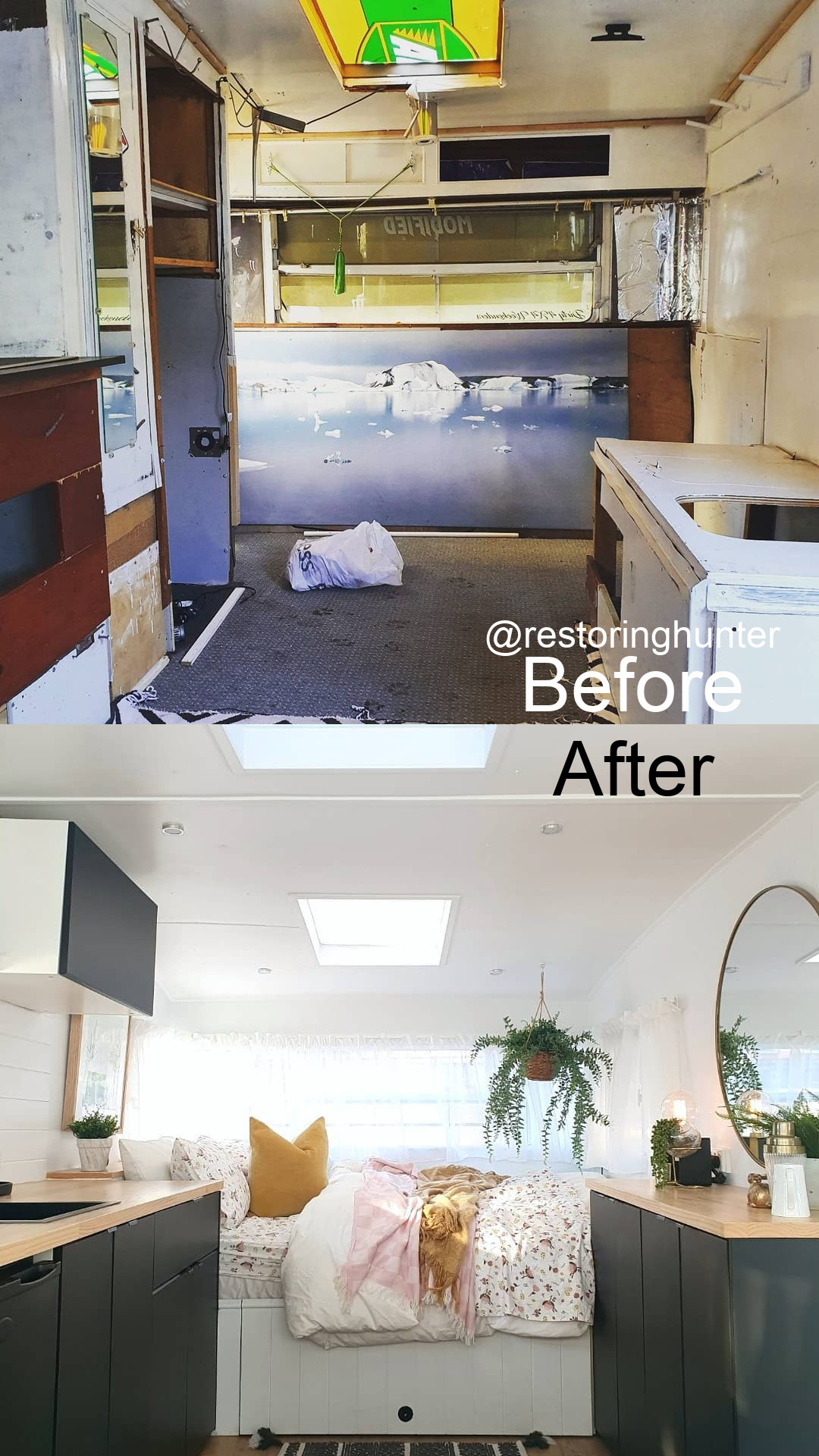 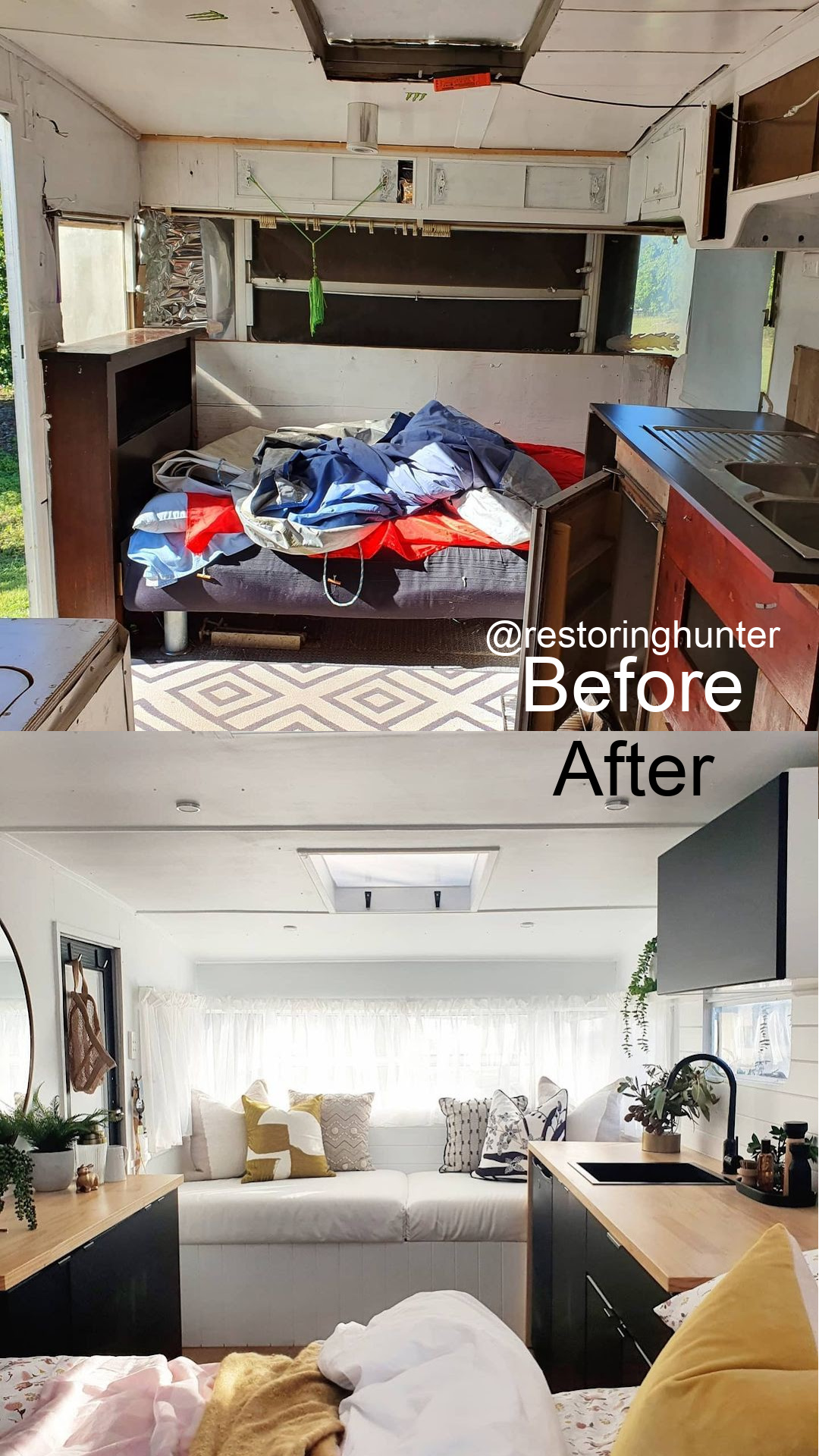 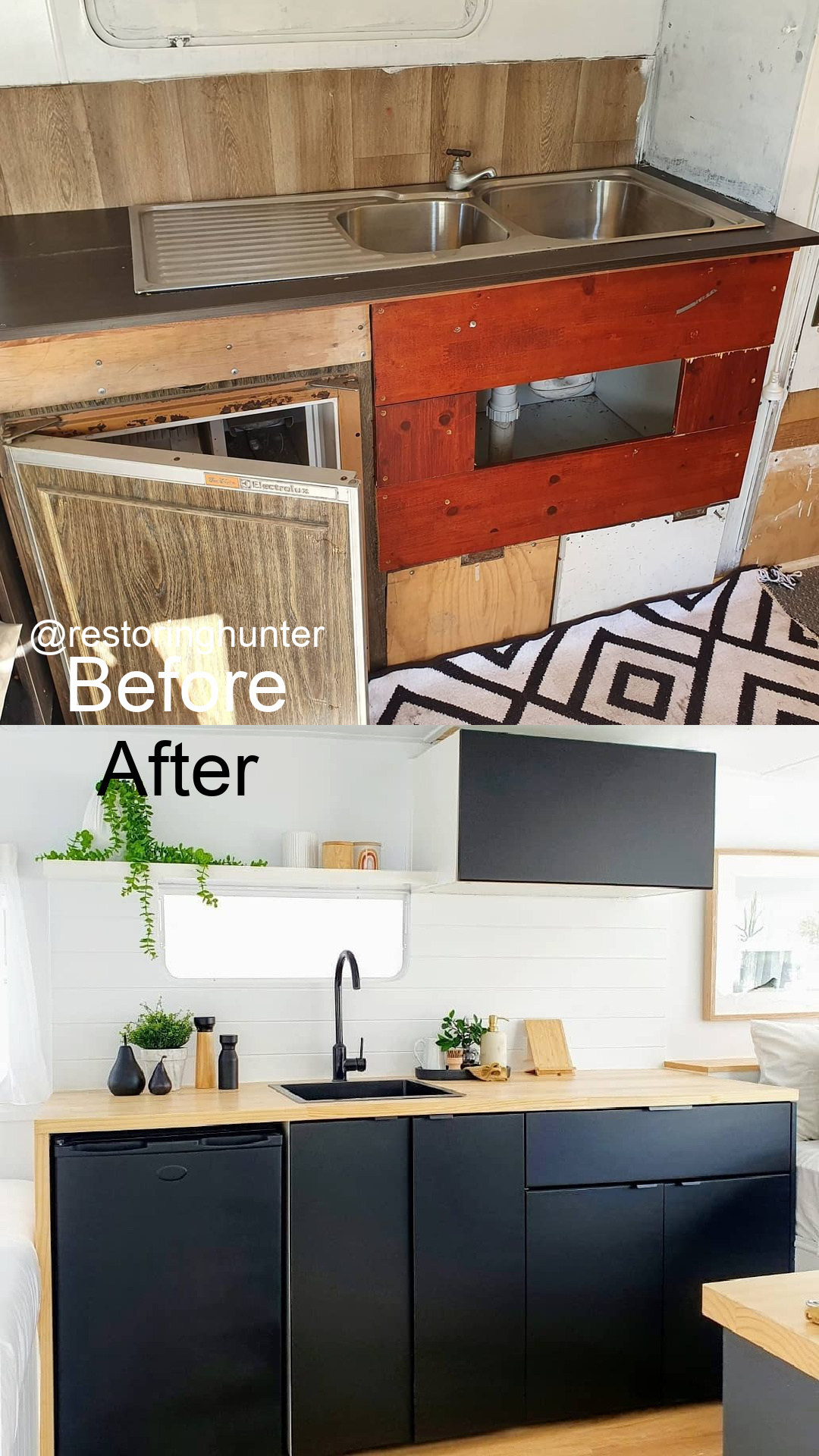 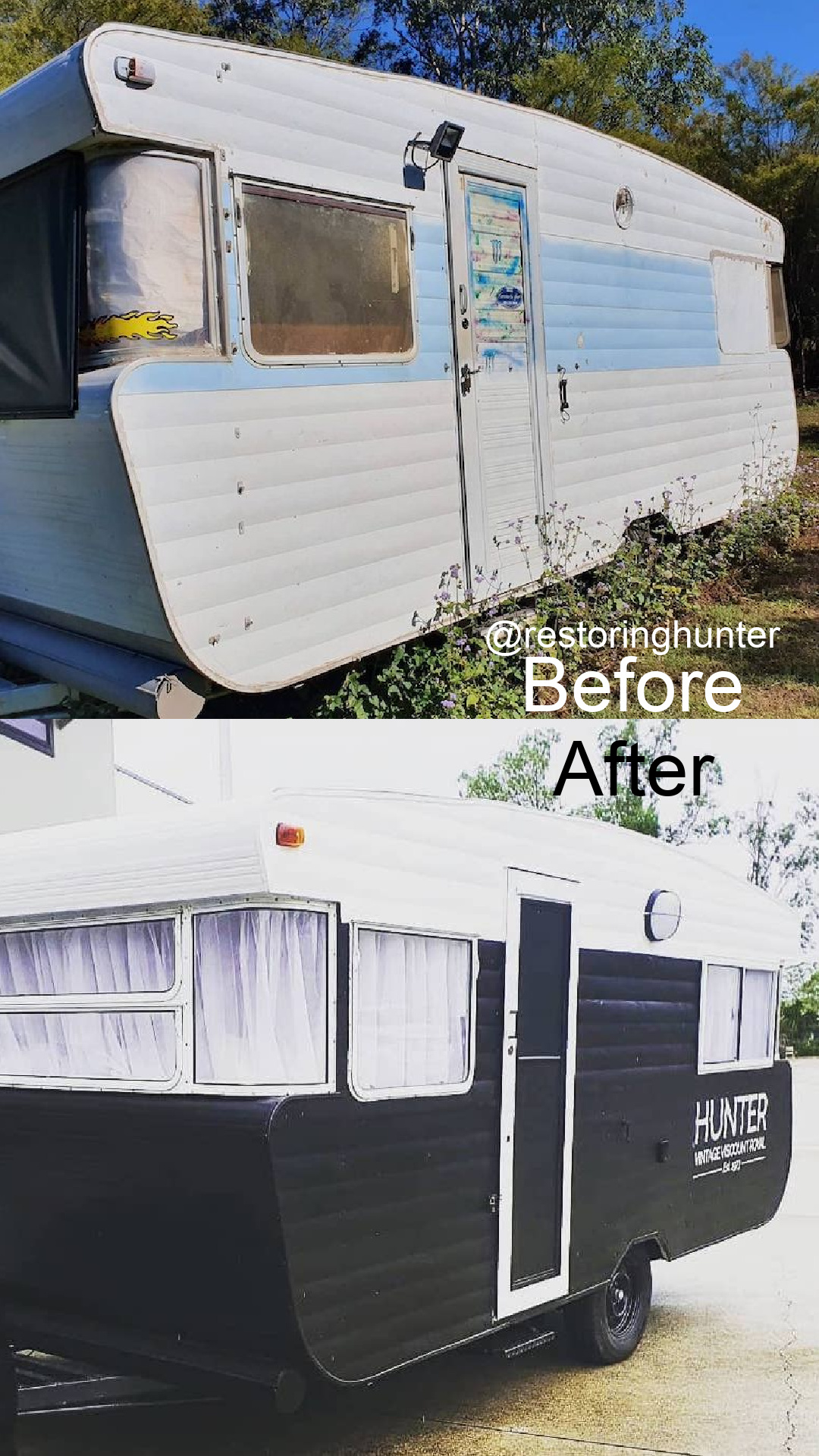 I think the most appealing thing about Hunter, is just how homey he looks while still being spacious and relaxing.

Interior styling is one of Samantha’s strengths and it really shows! 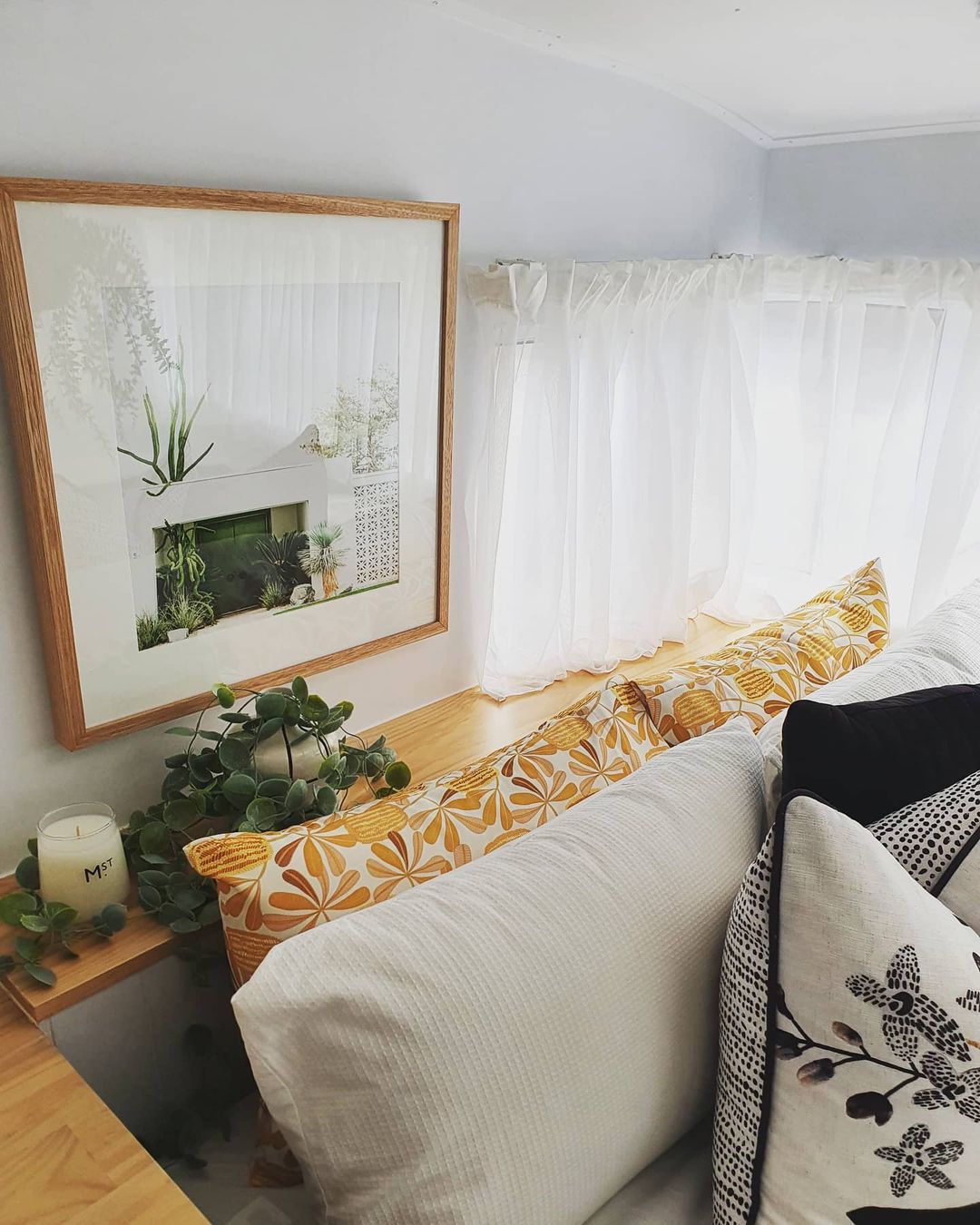 All this lovely interior styling is beginning to make sense now!

In such a small space, Samantha says that she likes to start with a neutral palette and invest in quality build and fixtures. 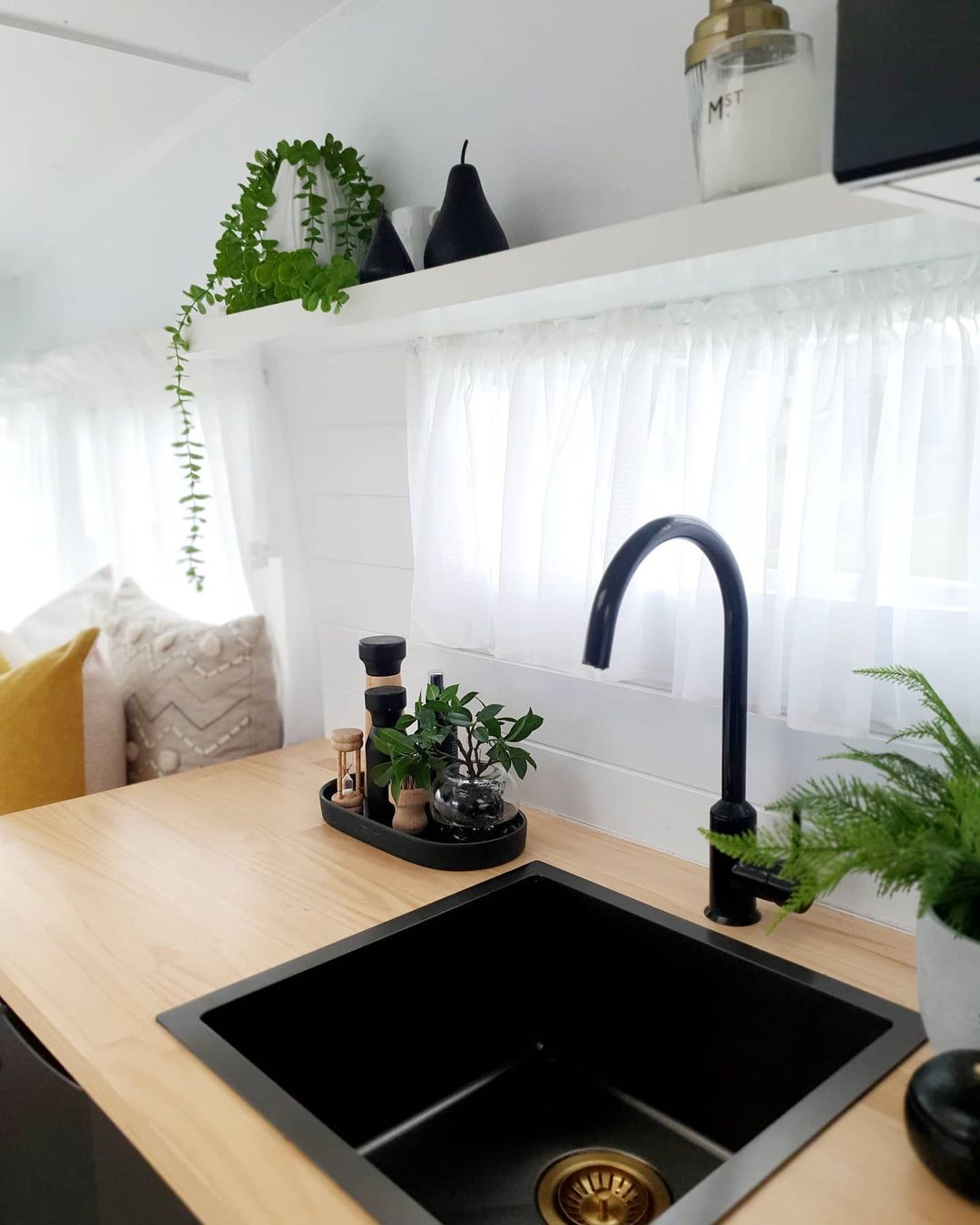 What about storage space in a camper remodel?

You’ll notice that Hunter only has one overhead cabinet, so I asked Samantha if she missed the storage space. She replied:

This is something I am constantly asked.  It was a very deliberate decision not to have overhead cupboards to a) open up the space, but b) so that Herb, who is 6 ft 4 in tall, did not render himself unconscious on a daily basis. 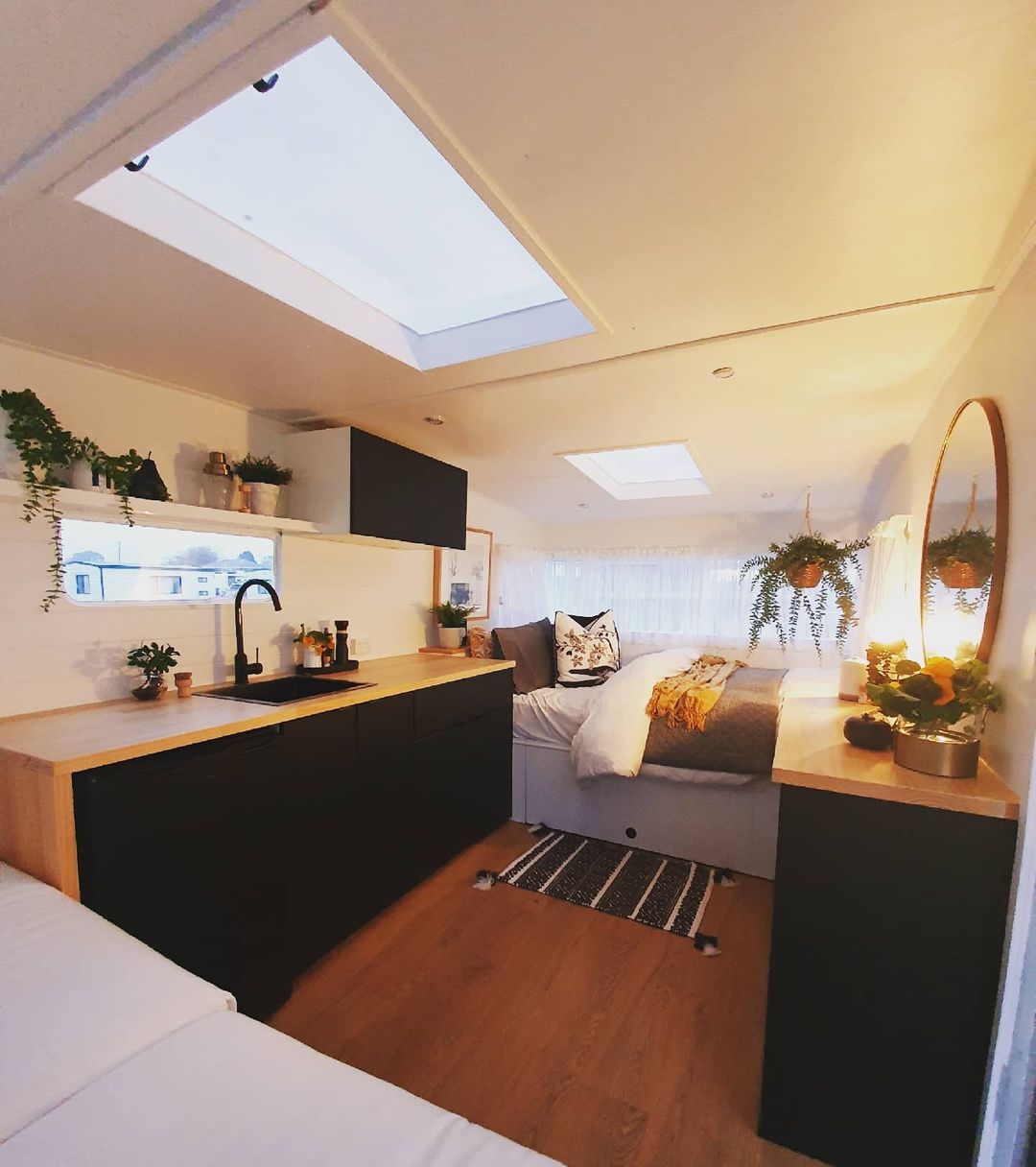 We have our beautiful outdoor awning which creates a whole other room in which we do all our cooking.

We have storage under our Queen size bed and also under our sofa/day bed.  But, TBH, they are only half full and we don’t access them on a daily basis.

Living tiny has given us the freedom to live with less and appreciate more.

We don’t need any more storage than we currently have, in fact we could have less.

We love the simplicity that this new life on the road brings, and every purchase is very deliberate now and has to serve multiple functions and not just look pretty.

How much this camper remodel cost?

This is in Australian dollars.

Samantha recorded the full costs of the camper remodel and it clocks up to $17,647 … a full $7,647 OVER their original budget.

But that doesn’t include labour. At a rough estimate they’ve spent 1080 hours on this restoration (780 hours physical labour and 300 hours research… so not really a ‘rough’ estimate, it’s more like a pretty accurate recording!). At just $20 per hour (minimum wage in Australia) that’s over $20k in labour costs.

Even though they went over budget, it’s still a relatively small investment in terms of housing. And Samantha and Herb now have a cute tiny home that can be decorated however they like. 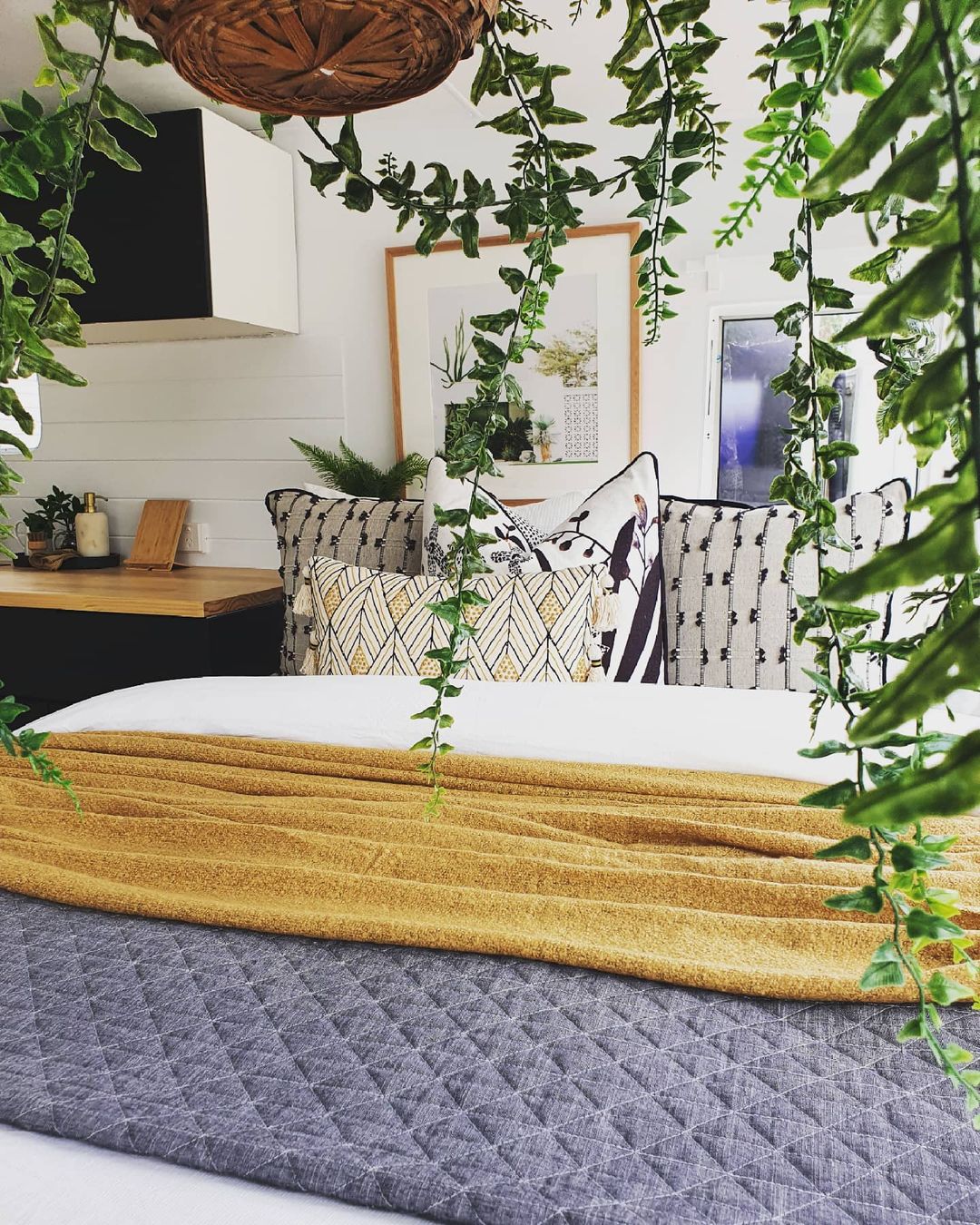 What about adding a bathroom to a renovated vintage camper?

Many of our North American readers may be shocked to learn that most of the vintage travel trailers in Australia do not include a bathroom.

Yep, you read that right. A bathroom is not included.

Holidaying in Australia during the 60’s, 70’s and 80’s often involved the family heading to the same beachside caravan park year after year. There would always be shower, toilet and laundry facilities at these parks, so it was not necessary for a travel trailer to include a bathroom.

While I have seen a few DIY renovators add a bathroom to their vintage campers, most do not.

For Samantha and Herb, they decided not to add a bathroom as they just didn’t  want to run the risk of any sort of leaks or water issues with having an indoor bathroom.

All the Big 4 Caravan Parks (a network of caravan parks in Australia, generally tending more to the luxury end of the scale) they have stayed in have been so clean, that Samantha prefers to do a commando roll over Herb and use the communal bathrooms, rather than an icky porta potty. 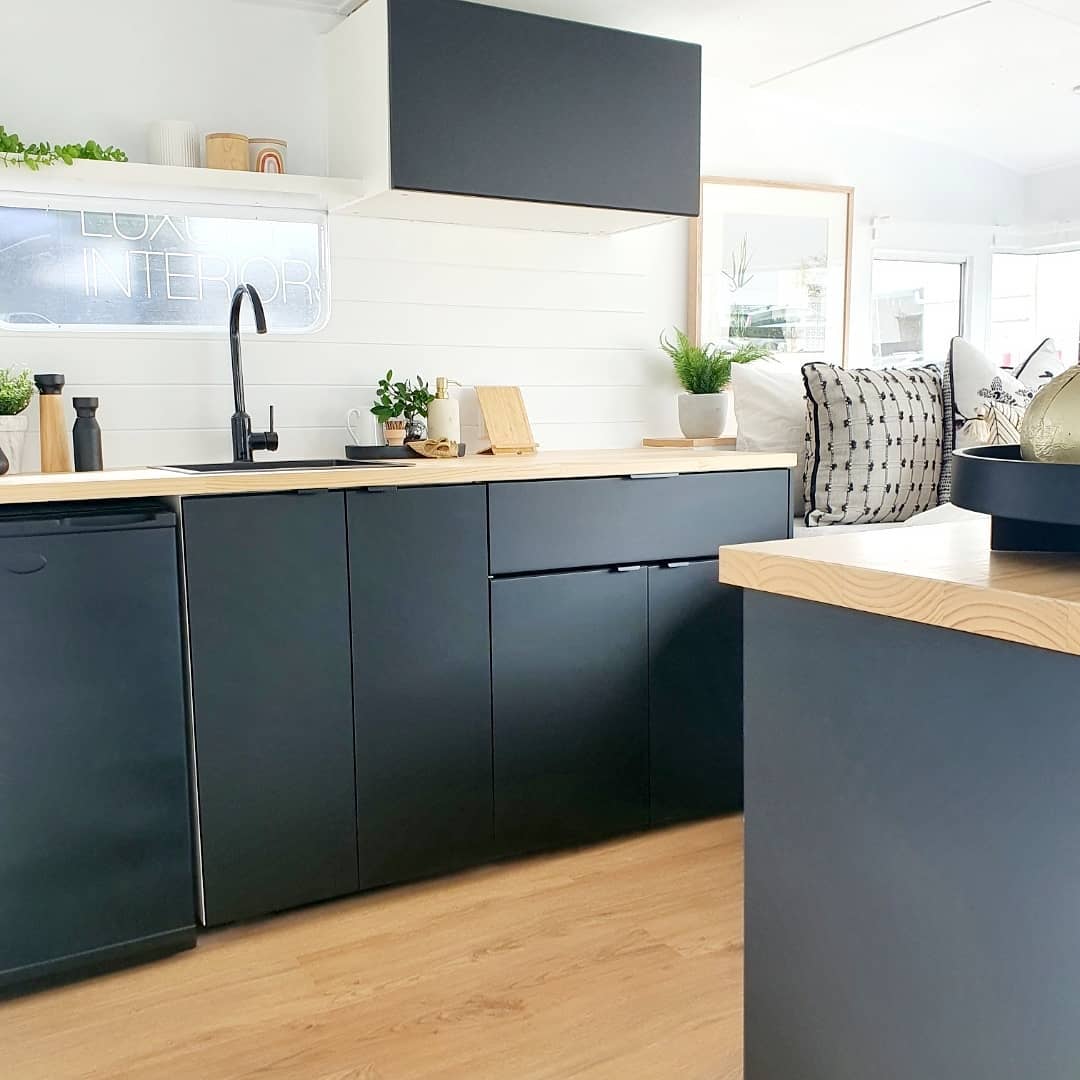 A community of DIY caravan renovators

When renovating Hunter, Samantha found a community of vintage caravan renovators via Instagram. She found that people were willing to help with her questions, offer advice, point her in the right direction and share their own experiences restoring their own campers.

And she now tries to give back to that same community by answering multiple cries for help every day at @restoringhunter.

More vintage renovations on the horizon?

Samantha joined forces with another renovator to renovate 2 more vintage beauty’s, and there may be more in the future.

But for now, Samantha and Herb are living in Hunter full time, as they travel around this amazing country. 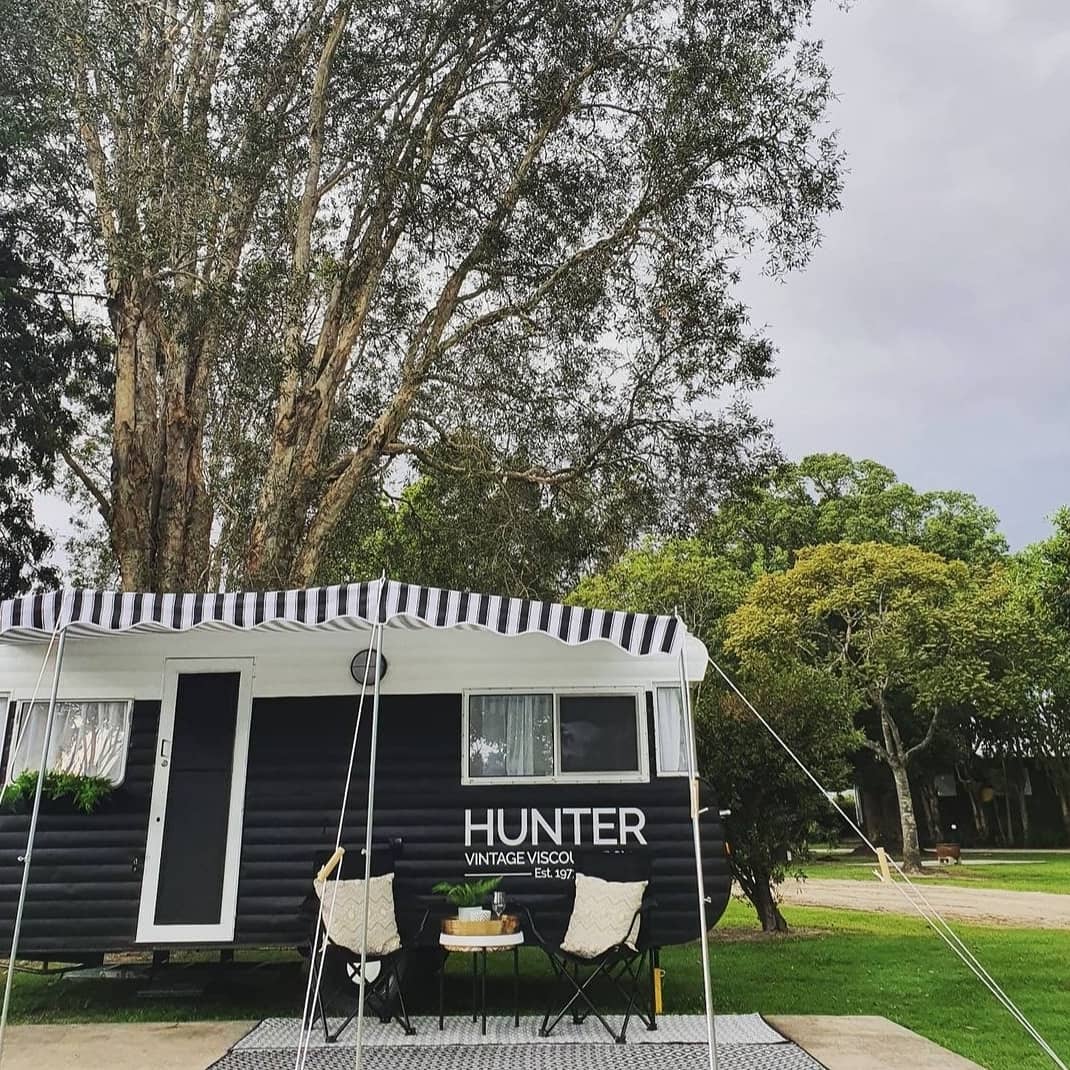 At @restoringhunter on Instagram Samantha shows detailed progress steps as she and Herb restored Hunter over the months.

You’ll find a wealth of information on renovating a travel trailer, great photos to inspire you, along with witty and entertaining captions to brighten even the dullest days.

Thank you Samantha for sharing how you and Herb have transformed Hunter. He’s amazing! 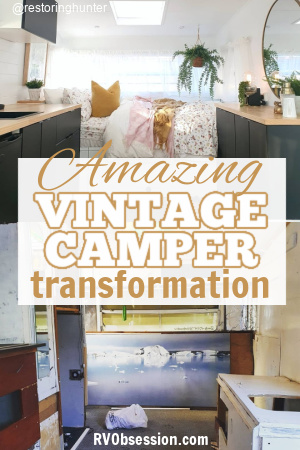