In this article we’re going to look at those arbitrary and unspoken rules that govern every campsite, that RV campground etiquette that you ‘should’ know if you’re a respectful human being, but you may not know if you’ve never lived in close quarters with others or lived a life where you have all your worldly belongings with you wherever you go. 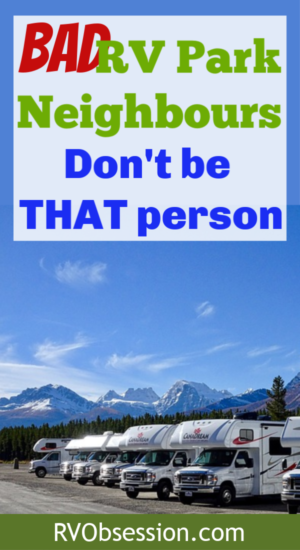 As we travel around Australia, staying at everything from rest stops on the side of the road to fancy resorts with lots of pools, a cafe and courtesy bus; we’ve found ourselves parked next to some of the nicest people… and some pretty annoying characters too!

When you’ve left your home in the suburbs where you can park your car in our own driveway, watch TV all night if you want to and cook or clean as early or late as you want; it can be a bit of a shock to find that you’re crammed into a site smaller than your driveway (!) and now everyone can hear you snore, watch TV or have an argument with your spouse.

You’ll find as you stay at more and more different campgrounds that you develop your own list of ‘rules’ that constitute what ‘being a good RV park neighbor’ is.

This is our list of the basic rules of camping.

I’m presuming things are a little bit different here in Australia & New Zealand, and I’ve never been camping in North America or Europe so I can’t really comment on that. However, I have included some videos on the topic from other well known RVers that may be helpful to you.

1. Keep all your belonging wholly within your site

This includes everything that you’ve brought with you: not only your RV, but also your tow vehicle (or toad), camp chairs and tables, bicycles, hammock, toys, tent ropes and pegs.

Stay within your allocated site and everyone is happy.

2. Don’t walk through other people’s sites

3. Be mindful of your noise

We’ve found that most caravan parks are good about having rules around noise, where it’s quiet time after 10pm.

We haven’t really had too much problems with noise, but sometimes people forget that even though they’re talking quietly outside as they have a drink, their bursts of laughter are shocking to the person sleeping only a couple of metres away with only a piece of canvas between them.

Oh… and hanky panky in the middle of the night is great! Except when you’re NOT one of the participants but you’re told repeatedly that you’re a stud and to do me. :-O

We don’t have children ourselves but I wonder if parents stress out a bit that their kids are making too much noise?  I’ve gotta say that kids making noise have been the least of our worries. To me, there is nothing sweeter than the sounds of kids giggling and playing. Even their fights and tantrums are not so bad (because hey, it’s not us that has to deal with them). Of course, it would be a different story when it’s bed time and you’re trying to get to sleep though.

The thing that is probably more annoying is parents constantly yelling at their kids.

Oh, and the big one: Camping Generator Etiquette – pretty much every caravan park here in Australia will not allow you to run your generator at all (I mean, they do have power so there’s no need). But when you’re boon docking / free camping it’s a different story. There’s no ‘rules’ as such because we’re all making the most of free parking on land we don’t own. But here are some tips for minimizing the annoyance of your loud generator:

Wave, smile, say hello to your neighbors and go introduce yourself if you’re comfortable doing that. We find that most people on the road are out to see new places, experience new things and are quite happy to meet new people. They really are the nicest people with (mostly) open minds and are ready and willing for a chat (sometimes a looooong chat… where they do most of the talking!).

5. Try not to block the road way for too long

You need to reverse your caravan into most sites here in Australia, as most people have caravans (travel trailers) of much less than 30 ft, and there aren’t so many pull-through sites.

So everyone needs to be able to back their trailers into their spot.

Of course some people will take longer to reverse into their site than others, but don’t leave your vehicle hooked up there for an hour while you fix the awning that you’ve just realised is broken. By the same token, give those who are taking longer than you would, a bit of space and grace.

6. Clean up after yourself

The camping etiquette for bathrooms is universal: clean up after yourself.

It’s just the basic stuff like making sure you dispose of any rubbish (like toilet paper or paper towels that fall on the floor by mistake, wrappers from feminine hygiene products, sticky plasters that come off in the shower etc).

If you’ve splashed water (or toothpaste, shampoo etc) it’s a good idea to use your paper towel to wipe up around the basin area. Some RV lots will have a mop to to mop up the shower area after you’ve finished, and if they have shower curtains, use them so that you’re not splashing water throughout the whole cubicle.

The same goes with any other shared park ammenities like the laundry, and if you use the camp kitchen or BBQ facilities, make sure to clean up after yourself. You’ll also need to make sure your site is clear of all rubbish before you leave.

7. Don’t park right next to someone else if you don’t have to

If you don’t have allocated sites and there’s plenty of room, then there’s no reason for you to go and park right next to someone else. Just give people some space and privacy. I don’t wanna be able to hear you fart, and you certainly don’t wanna hear me snore.

That’s just our tops tips for RV parking lot etiquette, but let’s hear from others who have been doing this a lot longer than us.

Kate and Joe from We’re the Russo’s have a great video on RV park etiquette.

Justin and Bec from Trip In A Van travel with their three kids in a caravan, travelling around Australia for the last three years now. Here’s their tips for RV campground etiquette and being a good caravan park neighbor.

This is another Aussie made list of do’s and don’ts… which captures our Aussie humour quite well, I think. From Camptoo:

It’s funny how your list of RV campground etiquette rules will come out of your own experiences. I haven’t included anything about making sure your dog is on a leash and to clean up after them, because we haven’t encountered that problem ourselves (although you should do both those things!).

So what about you, do you have any other rules on your own RV campground etiquette guide that you wish others would adhere to? 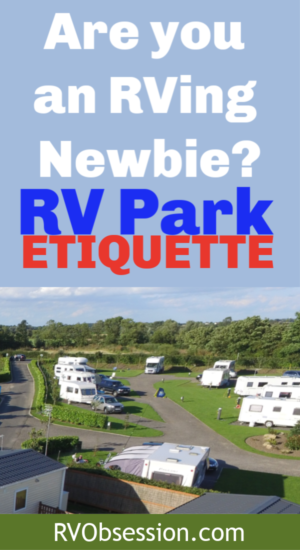 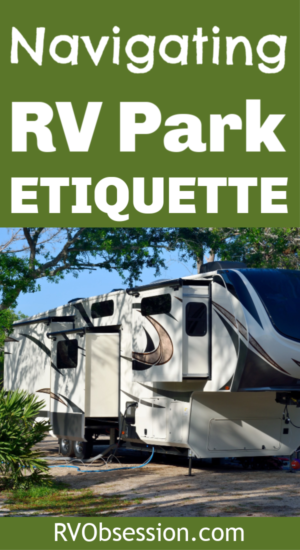 I think my sister and I would like to go to an RV campground this summer. We currently live in an RV, and sometimes, we wish to take a vacation from the usual sights that we see in the city since we don't travel much outside of our old home's property. Thanks for the advice that it's best to avoid walking through other people's camp sites unless we're invited to do so in order to avoid fights, so we'll be sure to do that.

We've been lucky and only had good neighbors so far (4 1/2 years full-time). Once, during a race weekend, we had some neighbors who were little loud, but just one night.

Yes, we're the same Julie, we've been very fortunate to have mostly good neighbors too. We totally expected a bit of a rowdy night on New Years Eve and were totally cool with that, but a huge lightning storm rolled through at about 9pm and sent everyone off to bed! :-) (Gosh, I didn't realise you've been full-time for 4 1/2 years, I have to go back and read more of your blog!)