Have you ever wanted to go on a big road trip around Australia?

It’s been my dream ever since I lived in Sydney for 10 years. And now, we’re on that journey. It’s not in the RV that I had hoped it would be, but it’s in a camper trailer / tent trailer which is all we could afford.

So here’s just a quick recap of where we’ve been in Australia on this road trip. (But really, this is mainly to explain the absence from this blog for so many months!)

Here’s where we’ve been:

If you haven’t been to Australia, you may not be able to relate to the size of this country. So here’s a graphic that compares the size of Australia to the USA:

We are travelling in an anti-clockwise direction. Here’s some of the highlights:

We’ve lived in Sydney before, so we weren’t there for sightseeing, we were there to find a 4WD and a camper trailer. We had purchased both within a week of arriving!

We made our way leisurely up the east coast of Australia, stopping in wherever it took our fancy and enjoying our new life on the road.

The east coast is the most populated (and popular) area in Australia, with it’s stunning coastline, beautiful weather and relaxed atmosphere. It’s a mecca for international (and national) tourists so there are not a whole lot of free camping opportunities, but there are plenty of caravan parks and campgrounds, with lots of national parks to visit.

As we moved our way up the coast, the scenery was equally beautiful…

From Cairns in Far North Queensland, we traversed across the top of Australia along The Savannah Way. A bit of a planning booboo though… I thought the Savannah Way was the main highway across the top, but the second half is actually through some of the roughest roads we’ve ever been on. They were very corrugated gravel roads with loads of pot holes and even sandy patches. It was a fun adventure though.

We reached Darwin, at the northern end of the Northern Territory and it was HOT! Too hot for us, so we only stayed for a couple of days before heading south again, this time through the middle of Australia. The Outback.

Cooler in the South

We reached the cooler temperatures of South Australia, and then stayed put in Adelaide, for four weeks!

And now we’re in a regional town in NSW where we’re going to find work and stay put for a couple of months. This road trip has made us realise that we LOVE this lifestyle, so we’re going to stop and work and save up for a caravan/travel trailer.

And that’s way I’ve been MIA from RVObsession for so long! This trip has fuelled, rather than quenched, my RV obsession, so I have lots more to share with you!

(If you’re interested in our road trip around Australia, we’ve blogged about it over at BenAndMichelle.com. If you’re planning trip to Australia, we’ve also got heaps of hints and tips on buying a vehicle when you get here, how to free camp (boon dock) and how much you should budget. 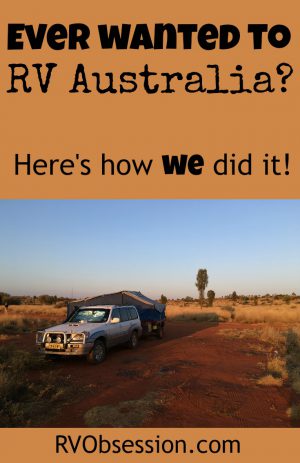