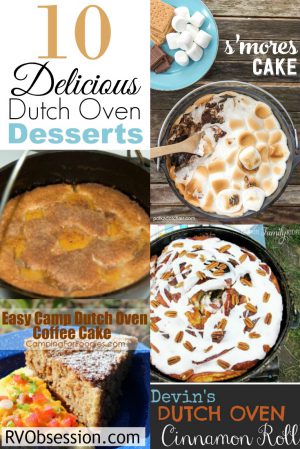 One of my favourite things about being in the great outdoors, is campfires. We don’t get a lot of chances to have them here in Australia and New Zealand (especially Australia) as there are often fire restrictions in place. But when we do have them, they are a wonderful treat.

I’ve only used a dutch oven a couple of times, but when we go on our own full-time RVing adventure, I definitely want to take a dutch oven with us. And when I look at the scrumptious recipes below, I’m even more convinced that we’ll have one!

This post was going to include all different types of recipes from starters through to desserts; but I made the mistake of looking at the desserts first and, well, I never got past them! So let’s start as we mean to end, okay?

(I’ve drastically reduced my sugar intake over the last 3 months so that could be why I’m so enamoured with the desserts. I’m sure you’d be the size of a house if you had one of these delicious desserts every night, so let’s just pretend that we would only have these maybe once a fortnight. Shall we do that?)

And just a heads up for my fellow Kiwis and Aussies out there… these are mostly American recipes, with American ingredients. Here’s some of our equivalents:

Pillsbury biscuits – apparently this is like what we would call a scone. It comes already mixed (in a can) and sorry, but I have no idea what the equivalent is. Although you could just use your Nana’s scone recipe, which will no doubt be the bomb. (Nana’s scones were ALWAYS the best.)

Now let’s just get on to the goodness! ….

How delicious (and EASY) does this look!?! Now this is MY kind of cooking. 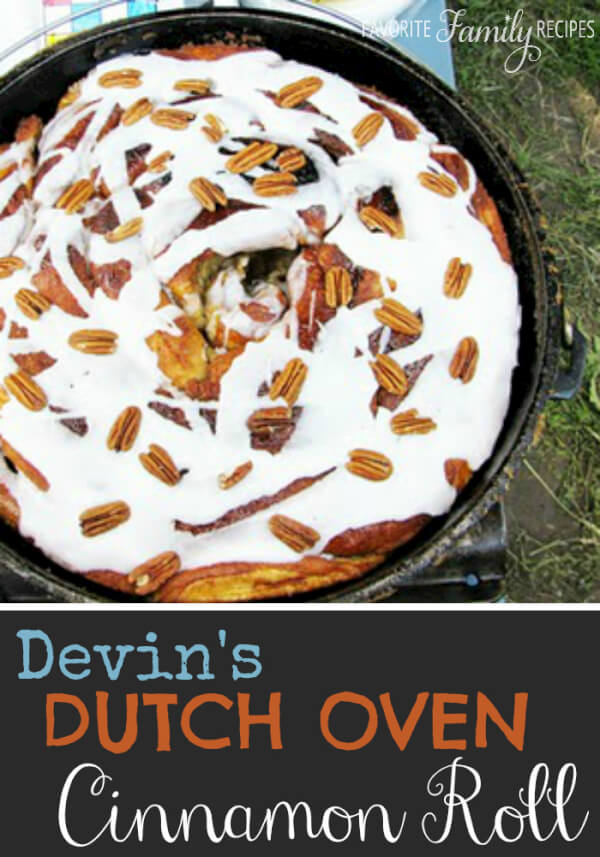 Sticky and sweet cinnamon rolls, what’s not to love? 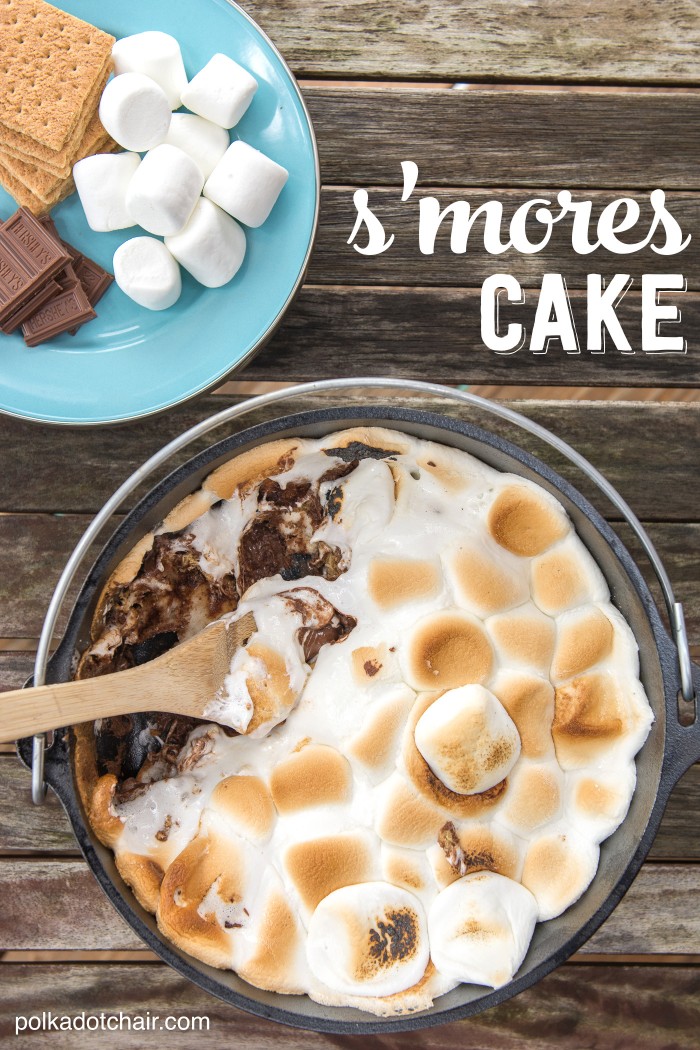 Is it really bad that I’ve never had a s’more? :-O In my childhood we always had toasted marshmallows (you know, a marshmallow on a stick shoved into the fire and more often than not, burnt) and they were a treat enough.

But we never developed into smooshing them between biscuits… and with chocolate! 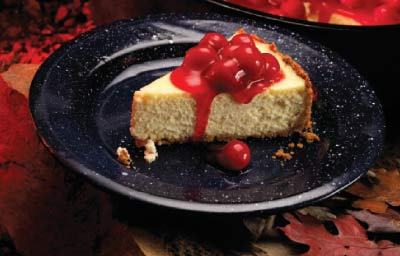 Really? You can make a cheesecake in a dutch over? While camping? This looks seriously good! 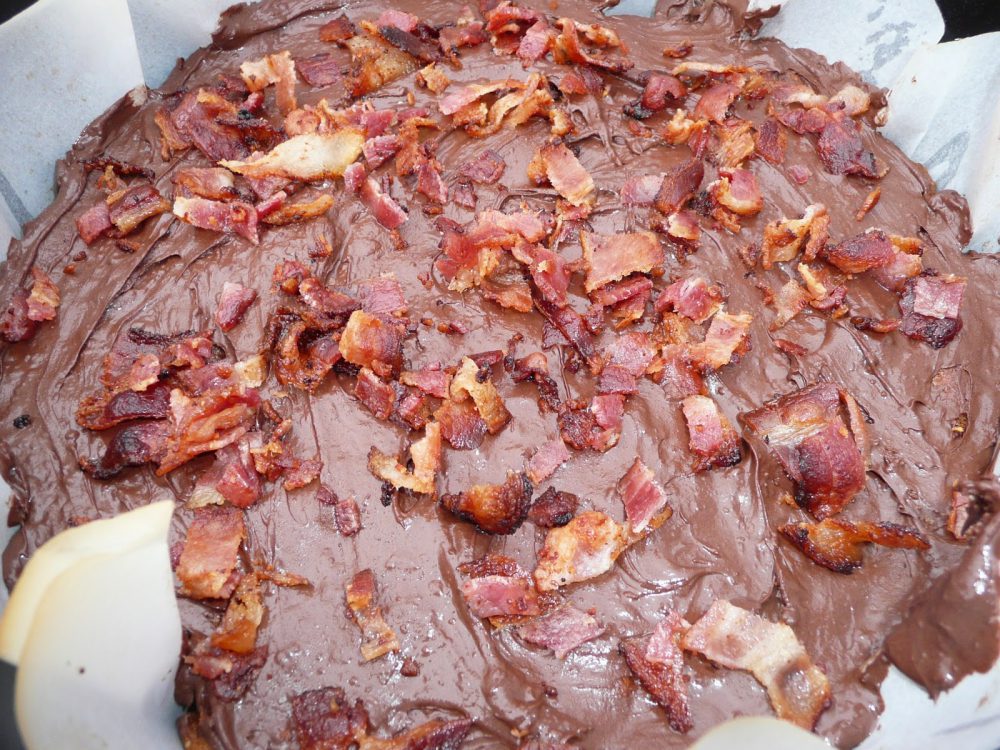 Yes, you read that right, that is bacon on the top of chocolate and peanut butter. I’ve never tried that combination myself, but I am wiling (nay… EAGER) to give it a try!

I found these Blueberry Cinnamon Rolls over at Dutch Oven Madness 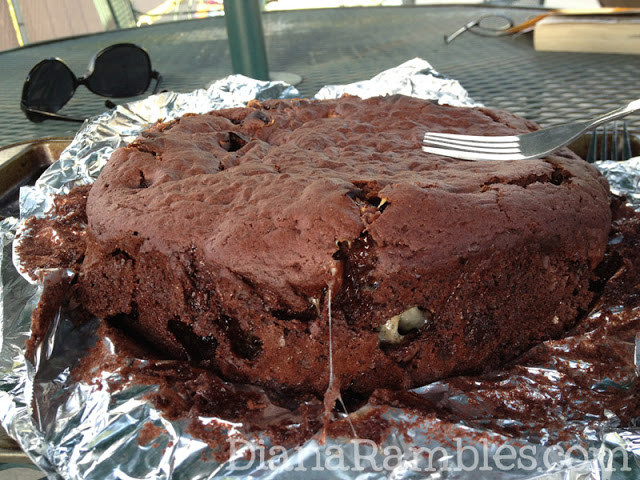 This Best Ever Chocolate Cake is from Diana Rambles

With chocolate and marshmallows in it, I can see why it would be the ‘Best Ever Chocolate Cake’! 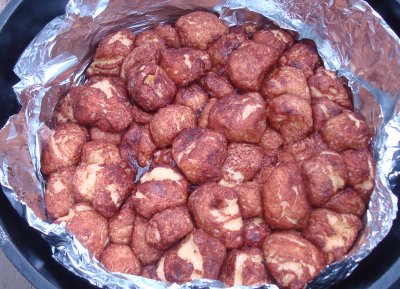 I’ve never heard of (nor seen) Monkey Bread before. But this is looking good. Is it kinda like a donut? 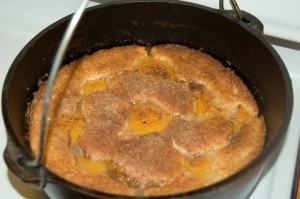 This is another new one to me, looks yummy. And best of all, easy to make!

If you’ve tried these dutch oven campfire recipes, please let us know how they turn out? 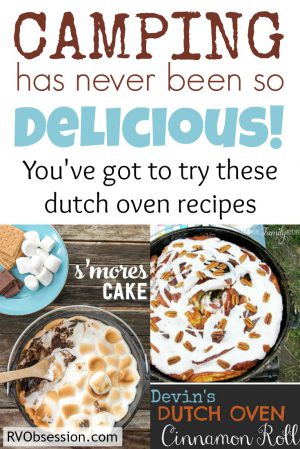